San Antonio Spurs star Kawhi Leonard was the No. 15 overall pick in the 2011 NBA Draft. But some may wonder why he went to San Diego State.

Leonard, who went to high school near San Bernadino and Riverside not too far from Los Angeles, was most interested in playing for the UCLA Bruins.

In a recent report, Sam Gardner wrote about why Leonard was unable to play at UCLA (via FOX Sports):

“Leonard had his sights set on UCLA, and [high school coach Tim] Sweeney says he had Leonard ‘signed, sealed and delivered’ to then-Bruins coach Ben Howland. However, Sweeney claims that jealousy over Leonard’s success during a brief AAU stint with L.A. Dream Team in the summer of 2008 ultimately led to Leonard falling out of favor with some of the area’s more high-profile universities.”

According to the story, Leonard outperformed Renardo Sidney — who was an all-state basketball recruit at Fairfax High School. Garner was unable to confirm these reports with former San Diego State head coach Steve Fisher.

Sidney went undrafted out of Mississippi State for various reasons including a fight with a teammate in the stands. He was considered a Top 10 recruit at the time alongside future NBA stars like John Wall, DeMarcus Cousins as well as Avery Bradley.

Sweeney said something similar during an interview in 2014 (via USA TODAY High School Sports):

“He played for Renardo Sidney’s father’s AAU team part of the time and he was showing up Renardo in every game. They ended up getting rid of Kawhi because of that and started badmouthing him to college coaches. UCLA, USC and all the big timers that were recruiting him just dropped off and stopped recruiting him out of nowhere.”

UCLA finished the season 14-18 and the Bruins were not invited to a postseason tournament. SDSU finished 25-9 and played in March Madness that season.

The following season, the Aztecs returned to the NCAA Tournament. They had a 34-3 record to end the year and advanced to the Sweet 16.

10 things you may not know about Kawhi Leonard 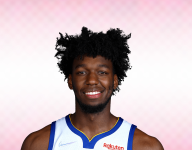