When we looked at five recent mock drafts, all seven of these players ranked in the top ten composite overall scores for the highest overall pick. That means just three of the projected first 10 players selected in the upcoming NBA draft are expected at the combine.

One NBA player recently spoke about Markelle Fultz and why he should not attend the combine, either (via Sports Illustrated):

“People don’t realize it because they didn’t get to watch him as much this year. I don’t want to say he’s a Russ-level athlete, but he’s closer to that than not. If he went to the combine, which I’m not sure he’d ever have a reason to, but if he went, he’d test off the charts.”

Fultz, who is considered the favorite to become the No. 1 pick in the draft, is unlikely to participate in on-court drills. During the NBA draft combine, some tests include jump shots — which anyone is susceptible to an off day.

The NBA invited more than 60 prospects to the event. Those that do decide to attend will be evaluated in Chicago from May 9-14. The biggest names that are expected will be De’Aaron Fox and Frank Ntilikina.

Other top prospects have made a point to skip out, including Ben Simmons and Brandon Ingram (2016), Karl-Anthony Towns and Jahlil Okafor (2015) as well as Andrew Wiggins and Jabari Parker (2014). All were selected with the top three picks in their respective rookie class. 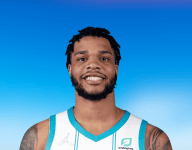