When asked about the NBA Draft Combine, Golden State Warriors star and 2014 NBA MVP Kevin Durant told prospects they should not attend.

The Combine, an event running May 9-14 in Chicago, has draft prospects run, jump and lift weights to give evaluators a feel for their athleticism. But Durant, who participated in the events 10 years ago, thinks prospects should stay home. He recently spoke about his experience, when strength coaches laughed at him when he tried to lift weights (via ESPN):

I was like, ‘All right, keep laughing. Keep laughing.’ It was a funny thing, because I was the only one that couldn’t lift it and I was struggling to lift it. I was embarrassed at that point, but I’m like, ‘Give me a basketball, please.’ … I knew that you don’t need to [bench-press] to lift a basketball up. And I knew that this wasn’t football, where that stuff matters.

During the events, he also struggled during the vertical leap, agility drill as well as the three-quarter-court sprint.

Durant had the third-worst vertical leap, fourth-worst sprint time and the worst lane drill. Yet he ended up as the No. 2 overall pick by the SuperSonics.

He also told ESPN he believes the Trail Blazers, who had the top pick in his draft class, wanted to select Greg Oden even before Durant’s poor combine performance.

It still doesn’t matter. I was ranked the last person in camp, drills-wise. I was the worst player, and the first player didn’t get drafted. That tells you a lot about the significance of that (expletive).

Other players who were unable to bench press zero reps at the combine include three-time NBA Sixth Man of the Year Jamal Crawford and 12-year NBA veteran Monta Ellis. 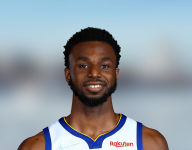