Boston Celtics star Isaiah Thomas has led his team to the Eastern Conference Finals. It’s easy to forget he was once the last overall pick in 2011.

He’s easily the most memorable last pick, and he’s well-aware of how rare he is.

The Celtics point guard recently spoke about the value he had in the NBA Draft (via ESPN):

Thomas, who was the 60th pick in the 2011 draft, was playfully asked whether it would have been better if Boston landed the final pick instead of the first. “No,” Thomas said with a smile. “There ain’t going to be another last pick like that.”

He’s not wrong. The six players picked before Thomas never played in the league. Only four others players besides Thomas selected in his class at any position have made both an All-Star team and an All-NBA team.

Spurs forward Manu Ginobili, who is also playing in the Conference Finals, was selected at No. 57 overall in 1999. It was the second-to-last overall spot. 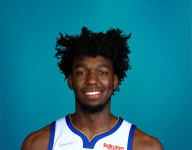