As the NBA approaches the end of its first week of free agency, we decided to rank each team in the league based on their current rosters.

After taking home the 2017 NBA championship, the Warriors were not only able to bring all of their key players back from last year but improve as well. Golden State has remained impressive in free agency and also made a great pick during the draft in their selection of Jordan Bell.

As the Eastern Conference has become less impressive, the Cavaliers roster looks even more ready to return to the championship. However, without former general manager David Griffin, Cleveland has had a quiet offseason. Worse yet, LeBron James has not recruited players to the team.

When Harden played as more of a point guard for Houston last year, he was incredibly ball-dominant for the Rockets. Paul, meanwhile, had a similar time of possession running point for the Clippers. It’s to be determined how they will split time under coach Mike D’Antoni but fans will be eager to find out.

The Celtics finished No. 1 in the Eastern Conference last season and then responded by adding a star in Gordon Hayward as well as one of the top players in the draft with Jayson Tatum. While more moves are coming in Boston for salary cap reasons, coach Brad Stevens has a fantastic arsenal.

If both Manu Ginobili and Tony Parker return next season, the Spurs will have had a solid offseason by doing nothing. They will get back point guard Patty Mills and Jonathan Simmons could find his way back to San Antonio as well. Kawhi Leonard has proven himself a force to be reckoned with and when he is paired with coach Gregg Popovich, the team should remain one of the best in the league.

This offseason, the Timberwolves have matched their youth (Karl-Anthony Towns and Andrew Wiggins) with star power (Jimmy Butler) and veteran experience (Jeff Teague and Taj Gibson) to create a team perfect for coach Tom Thibodeau.

What Jimmy Butler brings to the Minnesota Timberwolves: pic.twitter.com/2gi1h3ybyS

While the Thunder will be remembered for recovering from losing Kevin Durant last offseason by gaining Paul George to pair with 2017 NBA MVP Russell Westbrook, they also added necessary depth with the addition of an underrated Patrick Patterson as well.

With many stars heading West, the Wizards still brag a dynamic duo of John Wall and Bradley Beal. Even though the future of Otto Porter Jr. is currently undetermined, most reports indicate the small forward will likely return next season as Washington is prepared to match any offer for him. If he does, they will have a strong enough roster to contend once more.

Not only do the Bucks have the reigning Rookie of the Year in Malcolm Brogdon but they also have a fantastic young core with rising stars Giannis Antetokounmpo and Jabari Parker. They have a strong frontcourt and could be a surprise team to watch next season if fully healthy.

Denver made a sneaky impressive splash by bringing in Paul Millsap from the Hawks. Even though they will miss Danilo Gallinari, they also added a nice role player with Trey Lyles from the Jazz. Last year, the Nuggets were a top-five offense and only improved this offseason.

Even though the Raptors retained most the core players on their roster and are also in a comparatively weak division, losing Patterson to the Thunder will hurt the team moving forward as they attempt to make a run at James and the Cavaliers. Kyle Lowry and DeMar DeRozan are still a great fit but their window of opportunity may close soon.

Expect Blake Griffin and DeAndre Jordan to play a much more significant scoring role in Los Angeles without Chris Paul on the Clippers. While they received more back than many may realize, the loss of their star veteran will undoubtedly hurt the team as they try to determine their new identity.

No matter who the Pelicans face off against, they still will have the best big man tandem in the league with Anthony Davis and DeMarcus Cousins next season. The rest of the roster may not be much to write home about but their ability to keep Jrue Holiday in New Orleans will help legitimacy.

Philadelphia has trusted the process long enough for their slogan to finally seem legitimate. Joel Embiid showed flashes of brilliance when he was on the court last season and Ben Simmons looks to shine in his debut season. Meanwhile, No. 1 overall pick Markelle Fultz will have another scorer in J.J. Redick to establish a strong backcourt threat.

Even though the Trail Blazers have both Damian Lillard and C.J McCollum locked and loaded in Portland, their huge salaries have made it hard for the team to improve much during the recent offseason. Last season, Jusuf Nurkic played much better than anyone expected. So if he is able to continue (or even improve) then Rip City could make the postseason again.

Miami missed out on signing Hayward, who was their biggest target of the offseason. Once considered the favorite to land him, the front office was not able to get a deal done. However, if the Heat are able to re-sign their players who are free agents (like Dion Waiters, whom the team will sign to a 4-year, $52 million deal), it should be considered a little victory for the team.

Zach Randolph had become a staple for the Grizzlies but he has moved on to a new team this offseason. Tony Allen is rumored to be on his way out next, too. However, Mike Conley and Marc Gasol (so long as he is not traded) are still viable candidates to lead Memphis to fringe postseason contention.

It won’t be fun for the Jazz to recover from losing Gordon Hayward and George Hill immediately after a trip to the postseason. But Rudy Gobert is still an incredible talent and Utah may be able to sign someone like Rudy Gay to play key minutes at small forward. Plus, Derrick Favors and Ricky Rubio are still solid options. Meanwhile, Rodney Hood will have a huge jump as well.

Sacramento had one of its best drafts in franchise history bringing in point guard De’Aaron Fox as well as big man Harry Hiles and swingman Justin Jackson. They also added experienced veterans with George Hill and Zach Randolph. Bogdan Bogdanovic could be on his way from overseas. There is a lot to love about the Kings next season. However, they happen to play in the wrong conference.

Lots of interest for Kelly Olynyk, I'm told, with Nets, Pacers, Kings, Jazz coming on strong. Pacers are trying to shed salary to land him

Even though LaVar Ball promised the Lakers would make the postseason during the rookie season of his son Lonzo Ball, it seems far-fetched. However, the Lakers have still made significant strides this offseason. Their move to add consistently impressive big man Brook Lopez, even with the loss of former starter D’Angelo Russell, should not be underestimated.

Charlotte has managed to improve their team with rookie Malik Monk and veteran Dwight Howard both headed to the Hornets. Monk can provide an immediate relief to Kemba Walker as another scorer for the team while Howard provides legitimate defensive help in the post. If Frank Kaminsky continues to develop and Nic Batum plays to the potential of his contract, the Hornets could be a fun team to watch.

The Mavericks have been remarkably quiet during the offseason and may lose out on big man Nerlens Noel if they don’t match an offer sheet he signs with another team. Young players like Yogi Ferrell and rookie Dennis Smith Jr. will complement each other well in Dallas but otherwise, the front office has done little to improve.

Devin Booker will have a solid complementary player in rookie Josh Jackson, who will grow and develop with the young core of players in Phoenix. However, there’s still lots of room to improve for this team and fans may expect another trip to the NBA lottery next season.

Andre Drummond is obviously a solid centerpiece for an NBA franchise but otherwise, there’s a lot to be desired for the Pistons. Detroit has big contracts to Reggie Jackson and Tobias Harris but a lack of productivity and depth on their roster.

If not for the rising stardom and success of Kristaps Porzingis, the Knicks would have very little going for them as a franchise. The future of Carmelo Anthony in New York is still unclear but he lasted longer with the team than former President of Basketball Operations Phil Jackson.

The Magic were rumored to be targeting Joe Ingles from the Jazz but when nothing materialized, they remained oddly quiet during an offseason for a team unimpressive last season. Even though their draft selection Jonathan Isaac should be a great player, there’s still lots of room to develop the rest of the pieces in Orlando.

Myles Turner will inevitably step up as the face of the franchise in Indiana. The Pacers did not receive much in return for Paul George except for a real chance to start over without their former superstar. Rookie T.J. Leaf and free agent point guard Darren Collison won’t have a huge impact.

Atlanta has entered rebuilding mode after losing out on all of their former key players on the team. An ill-fated contract for Kent Bazemore last offseason may have hurt their ability to build this year but future draft picks can help next season.

The Bulls took three steps back this offseason losing superstar Jimmy Butler and adding very little in return. Even though they are looking to build a much younger roster, they will compete for not much more than a solid lottery pick for the 2018 NBA Draft.

Even though D’Angelo Russell will likely score a ton of points for his new team in Brooklyn, this team does not have a roster too ready to compete for success in the NBA.

On All-NBA Teams, West has flat out demolished the East the last two decades 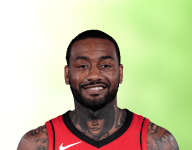