The Los Angeles Lakers have officially met with veteran point guard Rajon Rondo, who could serve as a mentor for rookie Lonzo Ball.

Right now, the Lakers don’t have a true backup point guard, but they are leaning toward re-signing Tyler Ennis, who joined the team via trade last season.

Last season, Rondo was considered an excellent and respected leader for the young players in the Bulls locker room. If pursued, expect the Lakers offer a one-year deal with a team option for the second season.

It’s worth mentioning the Lakers have said they will prioritize shooting this offseason during the free agency period. Meanwhile, Rondo shot a career-high 37.6 percent from three-point range last season.

The Knicks are another team with reported interest in signing Rondo this offseason.

Can confirm the Lakers met with Rajon Rondo and Kentavious Caldwell-Pope today. Still have about $17M to give someone on a 1-year deal.

Nets, Lakers among top teams who could sign Kentavious Caldwell-Pope 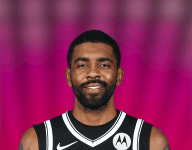