In the latest episode of The HoopsHype Podcast, Alex Kennedy talks with Sacramento Kings guard Garrett Temple. They discussed…

1:15: Temple’s thoughts on De’Aaron Fox and his long-term potential.

3:25: How he feels about the Kings’ incoming rookie class as a whole.

5:20: Skal Labissiere’s ceiling and how he has developed behind-the-scenes.

10:20: Garrett’s thoughts on the Kings signing George Hill, Zach Randolph and Vince Carter and how they’ll help the team.

12:40: His conversations with Hill, Randolph and Carter and what they need to do in order to build a winning culture in Sacramento.

14:10: After making these win-now signings, is making the playoffs next season a realistic goal?

16:00: Temple discusses the job Dave Joerger did in his first year as Sacramento’s head coach.

17:45: Temple shares the areas of his game he’s trying to improve with his offseason training.

20:10: Does Garrett want to be a coach or executive after his playing days?

21:30: What was his reaction to the DeMarcus Cousins trade, and how impressed was he with how the young guys stepped up in the aftermath?

25:30: His thoughts on Sacramento as a city and how free agents tend to enjoy it once they give it a chance.

27:30: How different is Sacramento’s culture now versus when Garrett first played there as a rookie?

29:40: Who were some of the veterans who mentored him and showed him how to be a professional when he was a young player?

31:45: How frustrating is it to play in the same division as the Golden State Warriors, especially after a strong summer like this?

33:20: His thoughts on Kyrie Irving reportedly demanding a trade from the Cleveland Cavaliers. 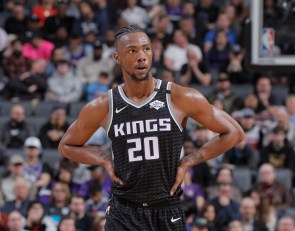 What does the Jabari Parker trade mean for Kings big man Harry Giles?