VIDEO: Giannis Antetokounmpo shows why he is unguardable in the paint

VIDEO: Giannis Antetokounmpo shows why he is unguardable in the paint

During the first six games of the season, Antetokounmpo scored 20 or more points in the paint on five different occasions. As the season has progressed, he has spent more time facing extra defenders when driving toward the lane.

But against the Pistons, despite an otherwise tougher night for him on offense, he broke free for a highlight dunk against Anthony Tolliver.

Marc Stein recently wrote about the way that defenders have struggled to guard him near the basket (via New York Times):

“No one has quite figured out how to size up this 6-foot-11 235-pounder who occasionally needs just one dribble from midcourt to swoop to the rim and does all that scoring without a dependable perimeter stroke to open up the rest of his game.”

According to NBA.com, his performances near the rim have truly been unparalleled this season. Through seven games, he averaged 1.65 points per paint touch. This was quite a significant improvement on the 1.19 rate that he recorded last season.

That is also much better than the rest of the league’s high-volume scorers whose offense often comes in the paint, including LeBron James (1.26), Jonas Valanciunas (1.25), Enes Kanter (1.22) and Andrew Wiggins (1.16).

Dwight Howard wanted NOTHING to do with this Giannis jam 💪

Dwight Howard recently showed the challenges of guarding the forward when he is driving to the lane. It’s nearly impossible. Chris Herring also wrote about why big men like Howard don’t have many options against him  (via Five Thirty Eight):

“Giving an abundance of room allows him to build momentum toward the basket, at which point he’s simply too tall, with arms too long, to be stopped at the rim.”

It’s not surprising that Antetokounmpo has been particularly effective on paint touches considering how well he has shot from close range in the first seven games of the year. For example, 66 percent of the field goals he made were within five feet of the basket and 77 percent were within nine feet of the basket.

Seeing a much stronger, more determined @Giannis_An34 out of the gates in the Opener so far. Impressive to see in person how much he’s developed even more into superstar status with the way he’s finishing near rim.

For comparison, James led the NBA in shots made within five feet of the rim with 6.4 baskets made during each of the past two seasons. Even though it’s a small sample size, the extra two buckets in the paint will be helpful for Antetokounmpo considering he does not have the same mid-range or outside game as James.

With the effectiveness that he has shown near the basket, he can prove that he doesn’t need a jumper to dominate in this league.

Antetokounmpo, Simmons and how to dominate in the modern NBA without jumpers 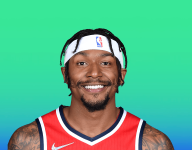