The Milwaukee Bucks have traded Greg Monroe and a future first-round pick to the Phoenix Suns for disgruntled point guard Eric Bledsoe.

Phoenix finalizing deal to send Eric Bledsoe to Milwaukee for Greg Monroe and a first-round draft pick, sources tell @ZachLowe_NBA and me.

According to The Vertical’s Shams Charania, the Suns delayed a trade until now “in hopes of receiving more value” for their guard, who tweeted his desire for a change of scenery.

Giannis Antetokounmpo (34.1 percent), Khris Middleton (26.7 percent) and Monroe (23.8 percent) currently lead the team in usage rating. But during the most recent two seasons of his career, Bledsoe’s usage rate was around 30 percent.

It certainly won’t be that high in Milwaukee as he isn’t going to be their lead option. Malcolm Brogdon, currently their starting point guard, has the second-most touches per game (63).

For comparison, Bledsoe averaged a team-high 87.9 touches per game.

Before the season, the Suns toyed with the idea of sharing point guard responsibilities with Bledsoe and Devin Booker. In the past, Phoenix had also tried a “three guard set” as well.

It’s currently unclear what the Bucks plan to do with Brogdon and Tony Snell, who compose their first-unit backcourt as of right now.

Milwaukee will now have to weigh all their options to make sure Bledsoe is utilized correctly and can impact on the team. 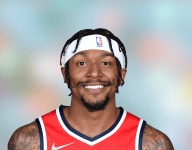