Quintin Williams, the co-founder and global chief designer for Q4 Sports, is on a journey to disrupt the sneaker world with his new company.

The niche market where Q4 will separate itself as a company, though, is by working one-on-one with various professional basketball players.

Williams previously worked with former All-Stars when he was a lead designer for a brand in China. He says that his new company is actively engaged in conversations with overseas partners who are very interested in distributing their line because it’s a high-performance product backed by influencers in the NBA.

This season, Q4 is doubling down on working directly with professional athletes – not just the biggest stars in the game – to offer rotation players their own player edition shoe.

“You’ll always see sick player editions for LeBron James or Kyrie Irving. As a sneakerhead, you want those because they’re limited edition,” Williams told HoopsHype. “Typically you’ll never get them unless the player donated them or something like that. But we wanted to give our athletes and their fans the option to get those, too.”

Their athletes become partners with the company and are able to directly profit from sales of their player edition sneakers and any other personalized merchandise.

Langston Galloway, a 25-year-old combo guard for the Detroit Pistons, signed a sneaker deal with Q4. In a conversation with HoopsHype, he said he joined because he wants to “change the culture” and “start something new” in the industry.

“They’re heading in the right direction. I wanted to be a part of that and was willing to help out,” said Galloway, who looks forward to showing off his style and passion for kicks. “I definitely think that more and more guys will join as we move forward.”

The self-described sneakerhead plans to have various colorways while he’s on the court this season, including not just home and away but also one that’s “a little different” and “all over the place.” He believes his shoes with Q4 will start conversations around the league.

Another player who has already signed a contract with the company is New Orleans Pelicans guard E’Twaun Moore. When he spoke to HoopsHype, Moore said that if we told him as a little kid that he’d have his own player edition shoe one day, he’d probably start jumping up and down and screaming due to all the excitement.

Moore seems confident the unique approach from Q4 will have tremendous success as it keeps growing.

“It’s like on the basketball court. If you want to get better, you’ve got to do different things. It’s a whole lifestyle,” said Moore. “With the quality of the shoe, people are going to gravitate towards it.”

The first time Moore wore Q4 in a game, he scored 19 points against Ball – who wore black Big Baller Brand kicks that night.

Moore was wearing a hybrid version of their 495 Lo with the cushioning of The Specialist. His kicks, as a tribute to New Orleans, have a graphic of a Mardi Gras mask on the upper. The tongue also features a nod to The Big Easy (a nickname for New Orleans) as well.

Here is a close-up look at the details on the “Mardi Gras” design on the Q4 495 Lo’s designed for E’Twaun Moore.

He explained that conversations about sneakers are a big part of the locker room culture in the NBA, as many teammates tend to ask questions about what each player is wearing. He also said that friends, family and various people via social media have already noticed his Q4’s and many tend to ask how they can get them, too.

Since their soft launch, they already have a few options of their basketball lineup available on their website. They will have their official launch during the NBA’s 2018 All-Star Weekend in Los Angeles and pop up stores may appear in various cities around the country.

Once options like Moore’s “Mardi Gras” PE hit the market, Williams believes Q4 offers a price point that sits at a sweet spot considering they have “premium” quality, support and comfort. But they are intentionally making their product cost less on the market than many other basketball shoes.

For example, the basic 495 Lo is currently available online for $110. Galloway advises that unless you have wide feet, this model runs about a half size big.

This chart was made during the 2017-18 NBA preseason, prior to when Q4 Sports entered the market (Credit: Versus Reviews)

Research from Versus Reviews indicates that two sneaker endorses for Q4 would give them as many as Reebok and Anta as the seventh-most popular brand among players in the NBA. The brand is talking to several others in the NBA about potential deals as well.

According to Williams, multiple players have shown interest in a signature line with Q4 but they are waiting for a decision that makes the most sense for both parties.

In the meantime, what’s already available from the Los Angeles-based company deserves the attention of those interested in the sneaker community. WearTesters has given Q4 Sports tremendously positive performance reviews, explaining the qualities of each type of shoe.

“Competition is in our blood,” explained Williams. “Q4 Sports is entering the market in the realm of basketball and might be the underdog, but we are going to definitely be disruptive to the industry.”

The untold story of why Lonzo Ball, Big Baller Brand remixed the 'ZO2' 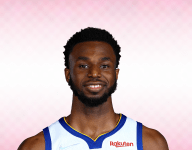