Paul George to the Rockets would be tough, but we can't rule it out

Paul George to the Rockets would be tough, but we can't rule it out

The Houston Rockets are once again linked in trade rumors for Oklahoma City Thunder star Paul George. But is such a deal even possible?

Even though the Rockets have James Harden (who is in MVP-caliber form) and Chris Paul, adding another piece like George whom they have long coveted could help them inch closer to defeating the Golden State Warriors in the Western Conference.

Daryl Morey has been looking to acquire Paul George to the Houston Rockets for the last two weeks. (Via Brian Windhorst – ESPN)

Daryl Morey, the ambitious and aggressive general manager for the franchise, is presumably interested in this kind of star power. George is one of the best defenders in the league and would also add value as another wing scorer. But the bigger question is whether George will be available.

Ken Berger recently explained that Oklahoma City was not interested in trading George (via Bleacher Report):

“According to a league source with knowledge of the team’s thinking, the Thunder were under no delusions that George was committing to anything beyond this season when they shipped [Victor] Oladipo and [Domantas] Sabonis—products of the Serge Ibaka trade with Orlando—to Indiana for the four-time All-Star. Furthermore, the source said, the team has shown no inclination to entertain trade discussions.”

However, it would be harmful to his trade value for the public to learn that George was fully available. It would make more sense for the Thunder to have sources indicate they were not going to trade him, which would make him harder to acquire.

But as Berger mentioned, if the front office in Oklahoma City does not think George plans to re-sign when he becomes a free agent in the offseason, the added assets may be helpful to their core.

There’s no reason to blow up the core quite yet. Once we are closer to the trade deadline, rumors will continue to spring up left and right. We should take them seriously.

Chris Broussard cited a league source saying that Paul George to the #Rockets would be a possibility as the trade deadline approaches. Noted any of Eric Gordon, PJ Tucker, LMAM, Ryan Anderson could be in play.

Chris Broussard has indicated the Rockets could be in play as a potential suitor for George, whose services have not quite fit with the 15-15 Thunder as of yet.

The Rockets would have to sacrifice key players like Eric Gordon, PJ Tucker, Luc Mbah a Moute or Ryan Anderson to make this deal one amenable for Oklahoma City.

Zach Lowe mentioned on his podcast before the season began that Gordon (with two first-round picks) and salary-filler could be enough to land George.

While this could deplete their bench depth in Houston, it would clear cap space for the upcoming offseason with Anderson ($20.4 million) and Tucker ($7.9 million) suddenly off the books.

Paul's Bird rights go with him in the trade. Could be eligible to re-sign with the Rockets in the summer of 2018 for 5-years, about $205 mm

They would then have Bird rights for both George and Paul before they enter free agency. Trevor Ariza is also set to become a free agent as well.

This would mean Houston’s only guaranteed players beyond this season are Harden, Gordon, Nene and Chinanu Onuaku. That would give them close to $42 million in cap space to fill their roster.

With money to spend, they would be able to renegotiate deals with the aforementioned players and attempt to persuade them to take pay cuts as they potentially compete for the NBA championship. George would likely have a taste of success on the Rockets, and he could be interested in re-signing for a longer deal once already situated.

Michael Lee of Yahoo Sports recently discussed this possibility with our own Alex Kennedy on The HoopsHype Podcast:

“I think he wants to win, first and foremost … I think his number one objective is that he wants to win. I mean, he’s 27 now. He’s not getting any younger, he’s in his prime and he’s overcome a lot to get back to being an elite player again. He’s going to explore everything, but I think he’ll go with the place that gives him the best shot at winning.”

This new core would be outstanding and stranger things have happened in the NBA. It might not be likely, but having his Bird rights and giving him a taste of contention could be enough to convince George to stay long-term rather than just being a rental. 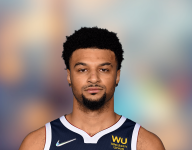