The New York Knicks are reportedly nearing a deal with 25-year-old point guard Trey Burke, who was a lottery pick in the 2013 NBA Draft.

Burke was named the G League Player of the Month in December and “strongly” prefers to sign with New York. He would have a clear role for the Knicks considering they are currently the worst team shooting three-pointers in the league.

Among those in the G League with as many three-point attempts this year, Burke (41.6 percent) is the second-most accurate. This was also a skill set he displayed in the NBA.

James Woodruff recently reviewed the former No. 9 overall pick (via The Knicks Wall):

“Burke is easily able to create space between him and the most tenacious defender. He doesn’t hesitate or settle for bad, rushed shots. What’s particularly endearing, similar to flame-throwers like Eric Gordon and Bradley Beal, his three-point form is so fluid. Whether he’s on the move or going man-to-man, Burke’s shot always looks smooth.”

Only one player (Kyle Korver) was more efficient than Burke (1.43 points per possession) on spot-up opportunities among those with as many attempts last season.

Trey Burke has the 2nd best season CPOE in the G-League this year. He's scoring 4.2 more points per game than an average player would on the same possessions

Look for Burke to also add value when shooting above the break for the Knicks. He was 23-of-58 (39.7 percent) on non-corner three-pointers last season, which ranked in the Top 10 among guards with as many attempts in the Eastern Conference.

Burke can be more than just a three-point shooter if he signs with New York. In fact, 24.9 percent of his points in the G League this season have come from midrange.

His midrange game (45.7 percent) was also Top 10 when narrowing it down to the same qualifiers above. During his final season in Utah, his shooting percentage on deep midrange shots (43.8 percent) was better than Stephen Curry.

He might not be the perfect solution for the Knicks but he certainly makes sense as they look to improve their shooting percentage from long distance. 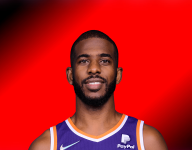