Nuggets have been dominating since coach stopped calling as many plays

Nuggets have been dominating since coach stopped calling as many plays

Denver Nuggets head coach Mike Malone made an interesting choice a few weeks ago when he decided not to call as many plays for the offense.

Only three teams in the Western Conference have a higher offensive rating than the Nuggets (111.8) since his declaration on January 21. Their assist-to-turnover ratio (2.09) is the second-best in the league during this stretch. This offense is running itself with a young core, which is incredibly exciting.

When Nikola Jokic has played with Gary Harris, Will Barton, Jamal Murray and Mason Plumlee, the Nuggets have somehow outscored their opponents by 30.7 points per 100 possession, which is the best in the NBA among five-man lineups who have played at least 40 minutes together since January 21.

Jokic, 22, has been outstanding in his most recent five games for the Nuggets.

Nikola Jokic is averaging almost a triple-double in his last five games.

The 6-foot-10 big man is averaging 25.8 points, 14.7 rebounds and 13.0 assists per 100 possession during his last fives games. Only two other healthy players in the league (LeBron James and Dejounte Murray) are averaging a triple-double per 100 through this recent stretch.

Ian Levy wrote about the unique skillset that Jokic provides for the Nuggets (via NBA.com):

“It’s not just that Jokic is capable as an offensive fulcrum with the ball in his hands, he excels in that role. He averages 10.5 potential assists per 36 minutes which ranks in the 85th percentile among all players, not just centers. If the matchup presents itself, Jokic can also punish the defense as a scorer — he ranks in the 98th percentile in scoring efficiency on isolations and the 65th percentile on post-ups.”

Murray, 20, has been wonderful for Denver for quite some time as well.

He has not missed a free throw in the last 10 games and his accuracy from the field has not been too shabby, either.

Only two players (Stephen Curry and CJ McCollum) who have taken as many above the break three-pointers have a higher three-point percentage than Murray (47.8 percent) since January 13.

Murray, Jokic and Harris have also been remarkably efficiency on midrange shot attempts, which have led the Nuggets (47.0 percent) to have the third-most accurate percentage from this zone since January 1.

The Jokic/Murray/Harris trio is flames

The offense in Denver has been remarkable recently and that’s still without injured big man Paul Millsap. Once he returns, expect the offense to only improve on post-up opportunities and when cutting to the basket.

This team has the worst isolation offense in the league so far this season, which actually means they are better at playing off each than one-on-one against opponents.

But they are the most efficient team in the league when scoring off the screen (1.14 points per possession) and are above average on handoffs as well.

The core for the future seems set for the roster, but expect mild shake-ups (like no more Emmanuel Mudiay or Malik Beasley) in the near future.

According to USA TODAY’s Sam Amick, they are interested in trading for a point guard. The Athletic’s Michael Scotto adds that the front office wants to upgrade on the wing and may target Utah’s Rodney Hood.

The 25-year-old is an above-average spot-up shooter and iso-based scorer and these are both areas of need for the Nuggets. Expect them to keep rolling into a contender as the season progresses. 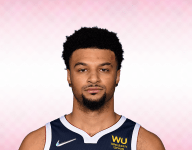