Boston Celtics head coach Brad Stevens will undoubtedly have a huge challenge in the postseason without star point guard Kyrie Irving, who has a bacterial infection in his surgically repaired knee and will undergo a second procedure this weekend.

I would be careful to bury the Celtics in the East with the Kyrie news. Boston has proven all season that they can win big games (home or on the road) with an undermanned team.

Even though Boston’s starting lineup for the playoffs won’t be as intimidating, the team cannot be counted out. As ESPN’s Bobby Marks noted, this team has won many games despite being shorthanded.

Kevin Pelton wrote about how the Celtics, who have gone 12-6 without Irving, have looked without their star point guard (via ESPN):

“In games Irving has missed, with better defenders replacing him at point guard, that’s improved slightly to 5.3 points per 100 possessions better than league average. Given that Boston’s schedule has been a little more difficult than typical with Irving out of the lineup, the sum total is a team 1.6 points per 100 possessions better than average, when adjusted for opponent and game location. But all the Celtics need to do is perform decently on offense to become difficult to beat, even without Irving.”

Below are the most-used lineups by Boston that do not include the star point guard or injured big man Daniel Theis.

Once again, Brad Stevens will have to lead the Celtics through the playoffs without their star point guard. While this team may be better equipped to handle the absence with the way Terry Rozier has filled in for Irving, it’s an almost insurmountable challenge nonetheless.

Outscored opponents by 19.5 points per 100 possession in 87 minutes

Will be interesting to see how far the Celtics can advance without Kyrie. Can they win a round or two with Terry Rozier as primary point guard? So young now with Rozier, Jaylen Brown, Jayson Tatum all filling key roles. Horford and Marcus Morris have to be consistent in playoffs.

Outscored opponents by 20.9 points per 100 possession in 52 minutes

Marcus Morris has been the leading scorer for Boston when Irving is not on the court, averaging 20.3 points per 36. But when he played alongside Irving, Morris averaged 15.9 points per 36. He is averaging 21.6 points per 36 since Irving last played on March 11.

Marcus Smart told @AdamHimmelsbach he's shooting for a return to the #Celtics in the second round of the playoffs, provided they get there. "The way it's going right now, we're on the right path. Hopefully nothing happens where it gets delayed." https://t.co/27FaHvIoAZ

Outscored opponents by 15.2 points per 100 possession in 43 minutes

Marus Smart has proven that he is the best distributor for the Celtics when Irving is not on the court, averaging 6.1 assists per 36. That’s comparable to the 6.4 assists per 36 that Irving averaged for the Celtics this season. If he is able to return in the first round or if Boston makes it to the second round, they will need that kind of production from Smart.

Cool with it if they keep feeding him for those looks. pic.twitter.com/Ncx4T4xV2B

Outscored opponents by 18.7 points per 100 possession in 35 minutes

Jaylen Brown shot 34.1 percent from three-point range as a rookie. But since the last game that Irving played, the second-year player has shot 53.8 percent on three-pointers. He’s not shooting from long-distance terribly often, though if his hot streak keeps up, it will be a valuable weapon.

Thinking back on how far from being a legitimate threat as a ball handler in the PnR Tatum was in Summer League makes this story from @JaredWeissNBA all the more impressive: https://t.co/tIaGH2mwpc

Outscored opponents by 25.0 points per 100 possession in 26 minutes

While many have noted that rookie Jayson Tatum is an excellent spot-up scorer, it’s also worth mentioning his prowess as the ball-handler in a pick-and-roll. He averaged 0.94 PPP on this play type, which ranks Top 10 in the East among those with as many opportunities. (Irving held the top spot before his injury.)

ok, i get celts don't have hayward, irving, and maybe not smart. But I'm not sure I want the Wizards playing them. We forget Al Horford has KILLED this team in playoffs before

Outscored opponents by 34.1 points per 100 possession in 25 minutes

Al Horford made the 2018 Eastern Conference All-Star team for a reason. He is a dynamic playmaker who can help the team win in various ways. With 1.28 points per possession as a spot-up shooter, only one player with 150 or more opportunities in the East has been more efficient.

Boston Celtics' Shane Larkin on playing for a contender, his development, Jayson Tatum's ceiling, his free agency and more 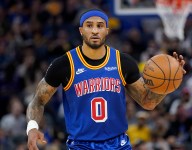