If the New York Knicks part ways with current head coach Jeff Hornacek when the season ends, there are some exciting potential replacements.

Frank Isola included a list of the top targets for the Knicks (via New York Daily News):

“Hornacek’s likely removal would open the door for the club to hire Mark Jackson, Doc Rivers, David Fizdale, David Blatt, Jerry Stackhouse or Jeff Van Gundy. A long-shot candidate, according to a team source, is Craig Robinson, who currently serves as the Knicks’ VP of player and organization development. He’s also a former college coach. Don’t rule anything out.”

We’ve previously reported Rivers as a potential candidate for the job in New York. New candidates like Fizdale, Blatt, Stackhouse and Robinson are all particularly newsworthy.

Fizdale previously coached Michael Beasley, who is currently on a one-year deal with the Knicks, when he was an assistant for the Miami Heat. Courtney Lee was on the Boston Celtics for a season when Rivers was the head coach.

Even though Stackhouse never played for the team, he has become an interesting candidate after rising the ranks within the Toronto Raptors franchise.

The Knicks, league sources say, have interviewed Jeff Hornacek for their coaching job along with Kurt Rambis, David Blatt and Frank Vogel.

New York interviewed Blatt for the vacancy in 2016 before they hired Hornacek. Blatt was collegiate teammates with Steve Mills (president) and Robinson (VP) at Princeton during the 1980-81 season. The three reportedly “remain close” and the former Cleveland Cavaliers coach would like to make an NBA comeback. 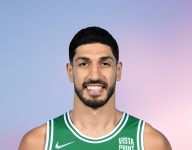