All 16 teams that made the postseason will have at least one player born internationally. The Utah Jazz and the Philadelphia 76ers lead the way with seven international players each. The Boston Celtics, Toronto Raptors and San Antonio Spurs all have six players born outside the United States.

More than half (36) of the European players who were on an NBA roster (64) to start the season will be featured in the postseason. One such international player is Tony Parker, who is making his 17th-consecutive appearance in the playoffs – the most among all players in the league. 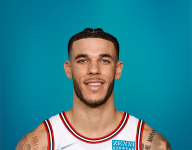