NBA sneakers of the night: Durant drops 32 points in KDX and more

NBA sneakers of the night: Durant drops 32 points in KDX and more

Last night at Oracle Arena, Kevin Durant scored 32 points as the Warriors defeated the Spurs, 116-101, to give Golden State a 2-0 lead. Although San Antonio players aren’t known for their sneakers, Manu Ginobili and Rudy Gay wore Hyperdunks that paid homage to the team’s iconic ’90s uniforms. Patty Mills rocked an Under Armour Drive 4 Low with a special message written on the side.

In Philly, Dwyane Wade turned back the hands of time and put on a show as Kevin Hart and Allen Iverson were in attendance, scoring 28 points to even up the series at 1-1 in his Li-Ning Way of Wade 6 sneakers. Amir Johnson is two-for-two on custom kicks in this series as he wore mismatched Why Not Zer0.1s. Markelle Fultz, who’s been wearing LeBron James’s signature shoes since he returned last month, wore James’s latest sneaker from his Soldier line.

Check out some of yesterday’s best sneakers from around the league.

Kevin Durant had another outstanding performance in the same KDX colorway he wore Sunday.

Dwyane Wade had NBA Twitter buzzing last night as he willed his team to victory in the Li-Ning Way of Wade 6.

During the playoffs, LeBron’s newest sneaker from his Soldier line is usually unveiled. Tristan Thompson first wore them Sunday and Markelle Fultz wore this white, royal blue and red one during pregame warm-ups before switching into the LeBron 15.

Throughout his career, Manu has kept his sneaker game along the Spurs’ ethos: clean and simple. He wore these black-and-white Hyperdunk Lows with a teal blue swoosh and an orange “20” on the heel.

Amir Johnson is wearing custom mismatched Why Not Zer0.1s. A tribute for Groot and a tribute for The Nightmare Before Christmas. #GreatFeets 📷: @sixers

After wearing Street Fighter custom Kyrie 4s on Sunday, Amir Johnson returned Monday afternoon with these mismatched Why Not Zer0.1s that honored Groot and Jack Skeleton.

Patty Mills wore this white Under Armour Drive 4 Low with a pink UA logo and honeycomb-type pattern along the forefront of the shoe. And that message on his sneakers was, um, interesting.

You can find (some of) these sneakers on HoopsHype’s Amazon Page. 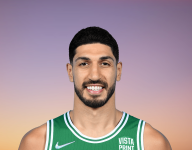