In what many believe will be a relatively tame market, all eyes will nonetheless point West once free agency opens up on July 1st.

That’s because the Los Angeles Lakers – one of the league’s most historic and proud franchises – will be one of the few teams lush with spending money. And what they manage to do with it will undoubtedly have ripple effects throughout the rest of the Association.

Obviously, a brand as powerful as Los Angeles’, being led by president of basketball operations and NBA Hall of Famer Magic Johnson, as well as general manager and former super agent Rob Pelinka, will have their hearts set on making the biggest splash possible – in the form of signing LeBron James.

If spurned by James (or even if they do land the superstar forward), then the Lakers will almost certainly shift their gaze towards hometown product Paul George, who will be an unrestricted free agent (provided he opts out of the final year of his deal, which he almost certainly will), and is rumored to have interest in returning to southern California this offseason.

Los Angeles’ chase for big-name players leaves them in an intriguing position with some of their own impending free agents, primarily one impressive young up-and-comer in Julius Randle.

After missing almost the entirety of his rookie season with injury and following that up with two solid but ultimately unspectacular campaigns, Randle has completely turned the narrative around on his career in his fourth year.

In 2017-18, Randle averaged 16.1 points, 8.0 rebounds and 2.6 assists per contest on 55.8 percent shooting. Additionally, if we solely look at his numbers as a starter (Randle joined the opening lineup on Dec. 29, giving us a 49-game sample size to work with), the Kentucky product’s marks become even more eye-popping: 18.6 points, 9.1 rebounds and 3.1 assists nightly. There are only four players putting up at least 19 points, nine rebounds and three assists this campaign; they are Giannis Antetokounmpo, Russell Westbrook, Joel Embiid and DeMarcus Cousins.

Safe to say, Randle is in elite company with his play this season. And to keep him, odds are the Lakers are going to need to pay him elite money.

They do have one thing working in their favor, however, as Randle is set to be a restricted free agent, meaning Los Angeles will be able to match any offer sheet their stout power forward signs this summer. What’s more, the Lakers also own his Bird Rights, so they’ll be able to go over the salary cap to re-sign him if they need to.

Nevertheless, as one of the few enticing young options set to hit the free-agent market, Randle shouldn’t have a shortage of suitors.

We break down his four likeliest destinations this summer.

Only two teams have more cap space available for 2018-19 than the Dallas Mavericks.

Though it wouldn’t make sense for them to try to splurge on guys like James or George, since players still at their peaks wouldn’t fit Dallas’ timeline, using a good chunk of their available funds on a 23-year-old with upside like Randle would make sense. A whole lot of it.

Also pertinent is the fact that Randle is actually from Dallas, making the potential marriage all the more logical.

Rick Carlisle was asked about Julius Randle: “You’ve watched him kick our ass three times (this season) … The guy is pretty damn good.”

…and how could he not be? In four games against Dallas this year, Randle put up 21.8 points, 11.5 boards and 5.6 helpers per contest, on 66 percent shooting.

Next to a point guard the Mavericks hope can become a franchise cornerstone in Dennis Smith, and playing for one of the league’s elite coaches, Randle would have every chance to flourish were he to return home.

It also doesn’t hurt that the 6-foot-9 power forward has yet to receive his first big payday as a professional, something the Mavericks could offer him with their abundance of cap space.

A franchise on a similar timeline to the Mavericks, the Phoenix Suns would also make some sense as a potential Randle suitor.

For one, they have cap space to use: Only seven teams have less money tied up to salaries in 2018-19 than Phoenix.

What’s more, due to the stunning growth of Devin Booker, Suns general manager Ryan McDonough has expressed interest in speeding up the process a bit, so to speak. In his own words (via the azcentral):

For what McDonough and Co. are looking for, a player like Randle would make perfect sense. He’s good enough to help Phoenix improve in the short-term, while being young enough to not hamper their long-term goals.

The Suns are also the current favorites for the 2018 draft’s No. 1 pick. If they take Arizona center Deandre Ayton with the top selection, they could create their frontcourt of the future by pairing the imposing seven-footer alongside Randle, and expedite the rebuilding process.

An Ayton-Randle partnership would have question marks defensively, but if they improve their chops on the point-stopping end, they could form one of the NBA’s fiercest big-man tandems, provided Ayton winds up reaching his full potential.

Another team set to have some money to spend this summer, the Indiana Pacers, are much closer to actual contention than Dallas or Phoenix and possess long-term pieces that would fit nicely with Randle’s skill set.

As a Laker, playing next to a floor-spacing center in Brook Lopez, Randle’s bull-in-a-china-shop style of attack was able to flourish in 2017-18. Los Angeles, in the duo’s time together, posted a fiery offensive rating of 111.1 (per NBAWowy). For reference sake, the best offense in the league this past season, belonging to the Golden State Warriors, had an offensive rating of 112.3.

That’s important for our purposes because the Pacers have a floor-spacing 5 of their own in Myles Turner. The Texas big man hit 35.7 percent of his shots from beyond the arc this season, and would form an exquisite partnership with Randle as the potential tandem’s abilities complement each other wonderfully.

Indiana also has their star perimeter player already locked up for the future, which could convince management to go after another strong building block this summer, like Randle. Victor Oladipo is signed through 2020-21 and considering he’ll be merely 27 years old when the deal runs out, it’s safe to believe the All-Star shooting guard may improve even further over the next few campaigns.

The most important reason to think the Pacers could go after Randle, though, is that they actually may have a hole to fill at the 4-spot, as their current starter, Thaddeus Young, has a player option he’s expected to opt out of this offseason.

If Young were to land elsewhere, replacing the veteran big man with a talent like Randle would be a home run for Indiana’s front office.

With $75.4 million tied up to salaries next season, that would leave the Pacers $25.6 million under the projected salary cap – which would be more than enough to make a legitimate run at Randle’s services.

At the end of the day, the likeliest destination for the fourth-year big man is still probably Los Angeles.

They can match any offer sheet he signs, they own his Bird Rights so they can go over the cap to bring him back and, perhaps most importantly, with his recent play, Randle may have performed his way into being a vital piece of the puzzle.

Not many players possess his mixture of ball-handling, finesse in the open floor and power near the basket. Add in his underrated distribution skills and you have the makings of an extremely unique young player. Although his defense still needs work (his wingspan will never allow him to become much of a rim protector), his other physical attributes (like his quick feet) give him the hope of eventually becoming an important contributor on that end.

Before his breakout campaign, the Lakers may have been able to convince Randle to remain with the team in 2018-19 at his qualifying offer ($5.6 million), before becoming an unrestricted free agent in the summer of 2019. But now that Randle has proven he could be a game-changing talent in the right situation, there’s no chance the big man or his team of advisers go that route.

So if Los Angeles somehow manages to strike gold in free agency by landing James and George (possible, albeit unlikely), they would have to let all of their other impending free agents go, as well as find a taker for Luol Deng and his albatross of a contract, if they want to re-sign Randle as well.

To do that, it would likely cost the Lakers one of their promising young players still on their rookie-scale deals.

Would trading away Brandon Ingram just to get rid of Deng, while adding two elite players in their prime and bringing Randle back, be worth it? Would Los Angeles be better served staying the course and continuing to develop their own impressive young core, at least for another season? Has Randle been impressive enough to warrant anything approaching a max deal, an offer he could very well receive from a rebuilding team like the Mavericks or Suns?

It’s impossible to answer any of those questions now, but one thing is for certain: Johnson and Pelinka will have their work cut out for them this summer. 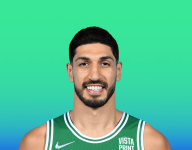