While top players like DeAndre Ayton and Luka Doncic will not participate in the 2018 NBA Draft Combine, many others have tons to prove.

Several of the highest-rated prospects expected to attend the combine in Chicago later this month will not compete in five-on-five drills an may not even provide athletic measurements.

But there are still several prospects who were invited to the combine that have not yet hired an agent. This means they could still go back to college, considering they’ve not yet forfeited their eligibility.

These are the potential NBA draft selections with the most on the line at the combine.

The combine should help someone like Thomas because of his wingspan. Here is what one Eastern Conference executive recently said about him (via The Athletic):

Thomas could easily be a first-round pick in the 2018 NBA Draft due to his potential as a 3-and-D player. The most recent mock from NBADraft.net has him selected with the 19th pick to the Atlanta Hawks.

After two years at Villanova, highlighted by a national title victory, he is one of the more fascinating prospects. Jonathan Wasserman wrote about him in a recent projection (via Bleacher Report):

“After dropping 31 points in the national title game, DiVincenzo is stirring up debate in NBA circles. He’s intrigued all season with his shooting, secondary playmaking and defensive toughness, but he could also return as Villanova’s top option and look to go higher in the 2019 draft.”

Either way, DiVincenzo is a player to watch at the combine — especially assuming he participates in five-on-five scrimmages.

Here is what a Western Conference executive recently said about the 6-foot-10 forward (via The Athletic):

“He’s a stud due to his body and frame. I’d like him to go back to school and work on his offensive game.”

The 19-year-old had 10.3 points, 6.5 rebounds and 1.2 blocks per game as a freshman. Sports Illustrated ranked him No. 22 overall on their draft big board.

His collegiate teammate Kevin Huerter has a similarly challenging decision to make this summer.

According to a source that spoke about his decision, the combine will be the ultimate test for Evans (via CBS Sports):

“All kids want to go if they can. He’s smart and not desperate. So it depends on the feedback from the NBA — not agents. Does he get a Chicago invite? If so, how does he perform?”

Evans averaged 13.0 points with 4.7 rebounds and 3.1 assists per game as a junior. One mock draft, also from CBS Sports, has him slated to the Golden State Warriors in the first round.

One NBA scout recently spoke about what the 6-foot-6 guard should do (via The Athletic):

“He needs to prove he can be more consistent. He has good measurements but wasn’t elite from a production standpoint.”

If he performed well during five-on-five matchups at the combine, it would do wonders for his draft stock. Battle

Josh Okogie (@CallMe_NonStop) could be a sleeper pick in the 2018 NBA Draft. He is 6-foot-4 but has a 7-foot wingspan and averaged 1.8 steals per game with 18.2 PPG last season. Going to combine + working out w/ Hawks.

Georgia Tech’s Josh Okogie has already worked out for three NBA teams, including his hometown Atlanta Hawks. He spoke about his future as a pro after a recent workout (via MyAJC.com):

“I think, really, the goal is to stay in the league. If going in the second round is how I’m going to go and stay, I don’t know. But right now, I’m always shooting for the best possibility, and I think I have the potential to be a first-round pick, so that’s everything I’m shooting for.”

It seems a first-round projection is reasonable considering he is ranked No. 23 overall on the most recent big board provided by The Ringer.

Matt Norlander recently wrote about why this is such a fascinating choice for the defending national champion (via CBS Sports):

“Could he boost his stock further next year? I think so. On the other hand, is he destined to be a guy taken in the early second round, no matter the year? If that’s the case, you could argue easily either way: return to college, dominate again, and live the glory for another 12 months. Or: go get the money now since your situation isn’t probable to drastically improve.”

Williams averaged 13.2 points per game with 1.4 three-pointers per game for Texas Christian. The junior needs to improve his accuracy from long range to keep his stock high, according to Jackson Hoy (via The Stepien):

“Like many players, Williams’ NBA chances will come down to whether or not his 3-point shot translates. He flashed the ability to hit out to NBA range this season but his free-throw percentage and low release point remain concerns. That said, there is a lot to like with Williams, one of the smartest players in this class in terms of anticipation, decision-making, and off-ball positioning. He can handle and pass at 6-foot-7 and maximizes his limited mobility with constant effort. Even as an older prospect, he’s a legit two-way player with the potential to be a valuable glue guy if he shoots well from 3.”

He is able to provide more than just scoring, considering he averaged 9.3 rebounds and 1.8 steals per game last season.

The highest ranked player out of high school last summer who hasn't hired an agent for the 2018 draft is No. 13 Jarred Vanderbilt.

In the last three years including this current freshman class, 90 percent of top-10 HS recruits have gone one-and-done.

The 6-foot-9 forward is also a skilled distributor who has impressed NBA personnel. Here is what another Eastern Conference executive said about him (via The Athletic):

Once considered a lottery pick, an injury setback slowed his production considerably last season. There is likely quite a bit more Vanderbilt could prove with another season in college. But if he does well at the combine, he may opt to stay in the draft process.

Even though he is a projected first-round pick on the most recent mock from NBADraft.net, others have him in the latter half of the second round.

This is what Sam Vecenie had to say about him in his mock draft (via The Athletic):

“McCoy had a remarkably productive freshman season but just doesn’t really fit the modern game as a back-to-the-basket, big-bodied center. He’s athletic enough to where he might outperform this spot, if he works on the little things.”

His collegiate rivals over at Nevada, Caleb Martin and Cody Martin, will have a similar choice to make this summer. 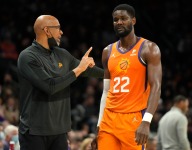 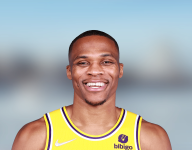 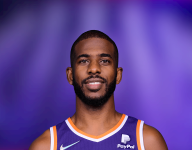