Kentucky Wildcats freshman forward PJ Washington declared for the NBA Draft without hiring an agent and will be at the Combine this month.

Paul Washington, PJ’s father, told the Louisville Courier-Journal that his son will stay in the NBA draft pool and forfeit his NCAA eligibility if he receives a guarantee that he will be a first-round pick:

“It’s real simple — if he’s guaranteed a first round pick, then he’ll stay in the draft,” Washington said. “If he doesn’t get that, we’ll have to make a decision. It’s PJ’s decision. Now, if he doesn’t get a first-round guarantee and a team says he’ll be an early second round pick, then PJ might say he wants to do that. That’s his decision as well. But the easiest thing is if he gets a guarantee in writing that he’ll go in the first round.”

His father did leave open the possibility of PJ staying in the draft if he’s projected as a second-round pick, but the decision wouldn’t be a sure thing at that point. Jeremy Woo wrote about why the freshman could decide to become a pro (via Sports Illustrated):

“Washington is testing the draft waters, and with Kentucky’s frontcourt potentially crowded next season, it wouldn’t be a total shocker if he stayed in the draft. He has good touch around the basket, a 7-foot-3 wingspan and powerful leaping ability, all of which help him play taller than his height. Washington was most effective in lineups with four shooters around him, and his best NBA role might be as a small-ball five, where he can switch defensively, set screens and be utilized as a dive man. It’s possible Washington could end up as a defensive tweener at the next level, but his mobility and feel should help him find success in the right situation.”

Washington has worked out for the Boston Celtics as well as the Brooklyn Nets. He has also scheduled meetings with the Los Angeles Clippers, Minnesota Timberwolves and Milwaukee Bucks.

University of Kentucky's P.J. Washington can be added to the list of players that have worked out with the #Celtics prior to the NBA Draft this summer https://t.co/zootnXUhp7

Here is what one NBA scout recently said when evaluating Washington (via The Athletic):

“[He] is tough, plays hard and has the makings of a solid player. As of now, his jumper isn’t great, and he isn’t dynamic with the ball, so I’m not sure what his NBA position is. I’m not sure he’s creative enough to be an elbow playmaker.”

As mentioned, it’s unclear if he is a small forward or a power forward at the next level.

His collegiate teammate Quade Green will return for his sophomore year, so the Kentucky backcourt will be strong. It’s unclear what will happen with forwards Jarred Vanderbilt or Wenyen Gabriel, though Vanderbilt (who will also be at the Combine) seems to have the highest draft stock of those mentioned above.

But the Timberwolves (No. 20), Bucks (No. 17) and Clippers (two lottery picks) will presumably have selections too high in the first-round for a draft guarantee to Washington. Several other teams, however, may express interest less publicly. 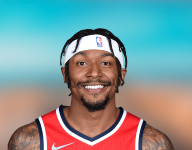