After being selected with the No. 5 overall pick in last year’s NBA draft, Sacramento Kings point guard De’Aaron Fox averaged 11.6 points, 4.4 assists, 2.8 rebounds and 1 steal in 27.8 minutes per game during his rookie season.

HoopsHype caught up with the 20-year-old to discuss his rookie campaign, offseason training, expectations for next year, draft prospects who stand out to him and much more.

From the start of your rookie year to the end of the season, how much do you feel you’ve developed as a player?

De’Aaron Fox: I developed a lot. One thing that I don’t think people really think about in development is a player’s comfort level. At the end of the year, I felt extremely comfortable with the ball in my hands and running the team. It was just a learning process. I definitely think I developed. I started shooting the ball a lot better toward the end of the season, I was able to get to the rack and finish. All year I was just learning the NBA game and where to pick my spots.

How much has your confidence level increased too? As you gained more experienced and became familiar with your teammates, coaches and plays, did you feel more confident on the court?

DF: Yeah, it definitely increased, especially once I started seeing shots go down. There’s a lot of games throughout the NBA season and when you have your ups, your confidence definitely goes up, your level of play goes up and other people start to have more confidence in you too, which is important. But yeah, I think when your confidence is up, you tend to play well in this league.

Who are some players you went up against throughout this season that taught you certain lessons, or that did specific things that impressed you and that you’d like to implement into your own game?

DF: There are a lot of guys. John Wall really stands out just because he was kind of teaching me during the game and we really have similar play styles. Another one is Chris Paul, just because of the way he was able to operate in the pick-and-rolls against us. Steph Curry, just the way he’s able to move without the ball. I think he’s probably the best off-ball point guard in the league; he’s so good at moving without the ball. It was a lot of stuff like that, the little thing that guys do that make a big impact.

What are some things that you’re focused on this offseason in terms of your training?

DF: Shooting the ball, of course, and then just getting stronger. I feel like when I get stronger and my body matures more, it’ll help every part of my game.

Do you have any goals that you’ve set for next season? I know sometimes that will come up during exit interviews or you’ll do it with your offseason trainer. Did you set any goals yet?

DF: Nothing stat-wise or anything like that. Next year, I just want to be a lot more efficient in what I do. And I feel like I’ll be playing a lot more minutes, so I have to increase my volume.

During your rookie year, you’re learning so many things on the fly and adjusting to the league. Are you excited to showcase your game in year two and do you think things will be easier for you next season?

DF: When you’re going into year two, you already know what to expect. You aren’t going in wondering what to expect, which is nice – especially as the point guard. With the minutes I’ll be playing next year, I think my comfort level will be through the roof. Also, I’m developing the relationship with Coach [Dave Joerger] where I have the freedom to control the team.

I think you guys have a nice young core and I’m sure your chemistry will continue to improve next year too. What are your expectations for next season?

DF: I think we can have a pretty good season, as long as everyone is working on their game and getting better during the summer. I think it’s good for everybody to get away and work on their game. Then, when we come back together, we’ll just try to implement what we learned.

We were pretty comfortable with each other by the end of the season. I think our chemistry level is through the roof. It was a lot better by the end of the year; you could really see it. All of the guys were learning the tendencies of others. We kind of changed the way we were playing throughout the season. In the beginning, we were playing pretty slow. Then, we sped it up, just because we were so young and it was good for us to play a more up-tempo style. I think the only place for us to go is up since we’re all getting better and trying to grow together.

I know you’ll be representing the Kings at the NBA draft lottery on May 15. Are there any prospects you’ve gotten a chance to look at and who stand out to you?

DF: I mean, there are guys like Michael Porter, Marvin Bagley III and DeAndre Ayton. There are a bunch of guys who I grew up seeing just because they’re only one year younger than me. Those are three guys I’ve known a while who are at the top of the lottery. I wouldn’t say I paid attention to just one of them; I enjoy college basketball, so I’ve watched a lot of those guys play.

You recently signed a unique autograph deal. Rather than signing with an established company, you’re only going to sell your autographs and game-worn memorabilia through your own website. Why did you decide to go that route and what are some of the benefits of doing that?

DF: I like that I can directly do stuff with people. At games, I like giving fans my jersey or shoes, and this is similar. I do keep some of the stuff that is memorable to me, but I’m giving the rest to fans and consumers. And part of the proceeds go to Albie Aware and Fox Whole Family Foundation, which raise money for breast cancer awareness.

DF: I’m extremely excited. This will be my first camp with my name on it and it’s really huge for me because my mom fought breast cancer and it’s something we went through together. It’ll be great.

I’m just excited – not only to raise awareness, but also to help these kids. There are some kids who really go through it [when a family member is battling breast cancer]. It’s great to be on the court with them and interact with them.

As you mentioned, your mother battled breast cancer and you were by her side. What advice would you give to any family that’s going through this?

DF: Just stick together with your family and friends. Make sure you keep your loved ones close. I would also emphasize that it can definitely be beat. A lot of people lose their lives, but it can be beat. Put your faith in God and he’ll take care of it. 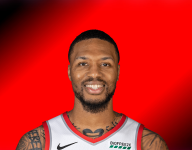