Price, who was the first pick of the second round in 1986, was traded from the Jazz to the Cavs on draft night and went on to help make the Cavs become one of the top teams in the East in the late 1980s and early 1990s. A four-time All-Star and four-time All-NBA, Price was one of the best shooters to play the game. 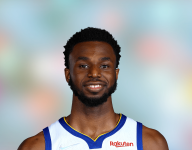