With the 2018 NBA draft just hours away, we have a final update of our aggregate mock draft. Most surprising: we have a consensus top-three.

It’s worth mentioning that all of the major mock drafts we looked at have Deandre Ayton at No. 1 overall with Marvin Bagley III at No. 2 overall and Luka Doncic at No. 3 overall. We know several teams may try to trade into the top five, which would shake things up. But as of now, the order is starting to materialize.

We examined the latest 2018 NBA Draft analysis from basketball experts at NBAdraft.net, ESPN, The Ringer, SI.com, CBS Sports and The Athletic.

It seems Grayson Allen will be a first-round pick. I know many of you hate him, but he's helping his stock during the pre-draft process. Even @wojespn predicted he would be a first-rounder. Here's a look at the teams that are expressing interest in Allen: https://t.co/FirJjdya69

Two of the biggest risers are former college rivals Kevin Knox and Grayson Allen. Knox ranks No. 9 overall, which is a solid place for him after an initial projection as a fringe lottery pick. Allen ranked No. 36 in our model released on June 6 and has since jumped to No. 24 overall. He’s expected to be drafted in the first round.

2018 NCAA Final Four Most Outstanding Player Donte DiVincenzo cracked the Top 20 for the first time, finishing at No. 19 overall. He ranked No. 27 in our first projection.

Former high school star Anfernee Simons is in the Top 30, which is an improvement from the second-round projection he received in our latest update.

If the Lakers keep the 39th pick, here are some guys they've worked out with or have been linked to in that range: Josh Okogie, Jacob Evans, Grayson Allen, Mitchell Robinson, Mo Wagner + Anfernee Simons. I wrote about why it could be Simons: https://t.co/LtRZahMn7s #LakeShow

Meanwhile, Mitchell Robinson (who did not play in college) has fallen from his initial place at No. 21 overall to No. 36 in the final update. Mysterious circumstances like canceling workouts and the combine haven’t helped his draft stock.

North Carolina’s Theo Pinson made his debut on our list, too, which was noteworthy as the draft draws near. 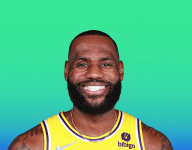