Will Thunder part ways with Carmelo Anthony due to luxury-tax bill?

Will Thunder part ways with Carmelo Anthony due to luxury-tax bill?

Are Carmelo Anthony‘s days with the  Oklahoma City Thunder numbered? When you consider their cap situation following the agreements they reached on Saturday night, it certainly seems possible.

In the weeks leading up to free agency, the Thunder were unsure if they’d be able to retain Jerami Grant. While the Paul George situation understandably attracted the most attention, the front office wondered if the 24-year-old Grant would end up being out of their price range.

However, an hour after free agency began, Oklahoma City was able to reach an agreement with Grant on a three-year deal worth $27 million.

This was shocking because as things currently stand, the Thunder’s luxury-tax bill (including the repeater tax) would be $130 million with only 11 players under contract.

This isn’t just high by Oklahoma City standards; it would be the largest luxury-tax bill in NBA history. It seems unlikely that a small-market team without much championship potential would pay this bill.

That’s where Anthony fits into this. One way the Thunder can avoid this tax hit is by moving on from the 34-year-old, who is set to make $27,928,140 next season after opting into his contract. If the Thunder remove Anthony from the roster and replace him with a minimum player, they would save $91 million in taxes.

This has led to speculation that the Thunder may try to buy out Anthony’s contract or try to minimize the damage by stretching it, which would allow Oklahoma City to pay his salary over the next three seasons. (Trading Anthony is another option, although that seems difficult given his 2018-19 salary.)

This buzz has made its way to NBA circles, as two players told HoopsHype they thought OKC would get rid of Anthony. The players requested anonymity because of the sensitivity of the situation.

“I don’t think Paul George would have returned to OKC if the roster was going to be the same,” one player told HoopsHype. “They already re-signed Grant. . . [Moving on from] Carmelo makes the most sense.”

Another player wondered where Anthony could end up if the Thunder were to part ways with him.

“I think the Thunder are getting rid ‘Melo,” the player told HoopsHype. “Then, I think newly stretched ‘Melo joins the Houston Rockets or joins LeBron James wherever he lands.”

If Anthony does hit the free-agent market, it’s possible the Rockets would be interested. They tried to land him last summer before he was dealt to the Thunder and now they have an even bigger need at forward because Trevor Ariza is leaving to join the Phoenix Suns. Anthony is close friends with Chris Paul and they have talked about their desire to play together.

In this scenario, the Rockets would likely try to land Anthony for the veteran’s minimum, which could work since he’d likely take home a good portion of his $27.9 million in a buyout.

But Anthony is also close with LeBron James, and they’ve had similar conversations about teaming up at some point before retirement. As of now, all signs seem to point to LeBron joining the Los Angeles Lakers. Could they be a potential landing spot for ‘Melo too? 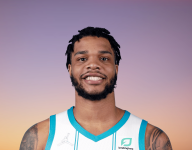