How many wins can LeBron James get with the Lakers next season?

How many wins can LeBron James get with the Lakers next season?

Now that LeBron James has agreed to join the Los Angeles Lakers, they’re in a better place than they were last season. But how much better?

The current depth chart is far from complete, it seems, but it’s begun to take form. Kentavious Caldwell-Pope is back in the mix on a one-year deal and the Lakers also signed veteran wing Lance Stephenson and big man JaVale McGee. More moves are coming, but predictions from experts are already on the way.

Here's an initial forecast for the Lakers using CARMELO projections and assuming they make *no* further roster moves, other than retaining Randle. 52 wins. Obviously this represents something of a floor since they have the cap space/assets to pull off another big move or two. pic.twitter.com/7o10H7HNI5

According to Nate Silver‘s projections, they’re expected to win 52 games next season. Silver described this as a floor for the Lakers, though, because he expects more transactions. When he factored in potentially adding a star, namely DeMarcus Cousins, they jumped to 57 wins.

The original expectation is the same as where Kevin Pelton predicted Los Angeles to finish next year, based on Real Plus-Minus figures (via ESPN):

“This model projects the Lakers to have an offensive rating 4.0 points better per 100 possessions than league average — identical to last year’s Cleveland Cavaliers. Meanwhile, unlike the Cavaliers during the regular season, the Lakers project to have an average defense. Typically, a team with the Lakers’ projected offensive and defensive ratings would win about 52 games, which would figure to put them in the mix for third in the Western Conference.”

Another estimate after the Lakers signed McGee put them around 47 wins, which gives us a bit of a range with their current rotation.

Updated 2018-19 win projection for the Lakers after agreeing to a deal with JaVale McGee: pic.twitter.com/9t2qrOB55b

While a regular season of between 47 and 52 wins is not exactly beating the Warriors, oddsmakers in Las Vegas have the team with 7-to-2 odds to win the NBA championship next season. That’s a factored implied probability of 22.2 percent, which is far from terrible.

Maybe he won’t be able to do that next season, at least not without another star on the roster. It’s too early to count out Kawhi Leonard or another more unexpected move. But if he is somehow able to dethrone Golden State during his tenure with Los Angeles, his legacy as one of the best players of all-time will be even more solidified. 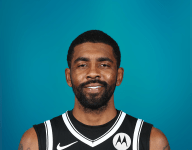