The Los Angeles Lakers signed Michael Beasley, who will join LeBron James for the second time in his professional career.

LeBron James played a season with Michael Beasley in Miami. They had no major issues & LeBron said he respected Beasley's talent. I mean Erik Spoelstra decided Beas was unplayable in the postseason due to defensive lapses. But in fairness I don't recall him forgetting the score.

Beasley has no shortage of confidence, considering he told Bleacher Report that his talent matches up well with players like James and Kevin Durant. While that sounds crazy, Durant told the New York Post that he was “feeling him” on that.

Tom Haberstroh, who used to cover the Heat, discussed how the two would match up when they used to play against each other (via Back To Back):

“Legit, in practice in Miami, I would watch these practices where LeBron and Michael Beasley would go at it — like one-on-one. And Beasley would beat him every time. He’s so good!”

The problem was never a lack of talent for the former No. 2 overall pick. In an article published in 2014, Boston Globe’s Gary Washburn reported that James “was not pleased” with Beasley’s lack of focus.

"He’s definitely one of the guys that can change your life, just being around him … It was one of the best years of my life." -Michael Beasley, on playing alongside LeBron James.

It’s been four years since then, however, and Beasley has assuredly matured into an NBA veteran. When he spoke to HoopsHype last season, Beasley said that he still talks to James to “bounce certain situations off [him]” and that the four-time MVP has helped him a ton in his career.

Even if he does not receive a tremendous amount of playing time with the Lakers, it will be a fascinating situation for the 29-year-old forward. Expect him to step into his role and bring some necessary scoring to the bench unit for Los Angeles.

And as if the idea of Beasley and James playing together isn’t fun enough, we also may get another video like this: 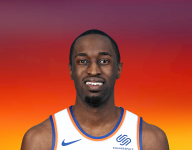