Bucks' Christian Wood: 'I know that I can be an X-factor in the NBA'

Bucks' Christian Wood: 'I know that I can be an X-factor in the NBA'

Christian Wood, who was one of the most interesting players in Las Vegas this summer, has agreed to a contract with the Milwaukee Bucks.

Wood was awarded All-NBA Summer League First-Team as well as All-NBA G League Second-Team in 2018. The big man averaged 20.4 points and 10.8 rebounds per game while shooting over 30 percent on three-pointers in Las Vegas. He has averaged 20.6 points and 10.0 rebounds over the course of his three years in the development league.

According to Matt Velazquez, Wood will compete with several others for a spot on the Bucks’ roster next season. He recently caught up with HoopsHype to discuss his busy offseason.

Your rebounding ability and scoring ability were on full display in Las Vegas. What felt right for you this time around while competing for a roster spot at Summer League?

Christian Wood: It felt good, I’ve been around numerous times so I had a good feel for the competition. I felt like once I got things going, after the first game, I just knew it was going to be good. I had a good sense of how people guarded me on pick-and-rolls. I was able to impact the court on both ends while running the floor. My knowledge of the game, my energy and my hustle helped show that I have a motor that can help my team.

What feedback have you received from the coaches who saw you play this offseason?

CW: They liked my versatility and how young I am despite how much experience I have. I know I need to get stronger, but I know the way I can play has intrigued a lot of people. Even though I haven’t yet had a chance to perform like that on a big stage, I got some more eyes on me this summer and more people were able to notice this year. I just want to be able to showcase what I can do on the court. Once I get the time and people see me, I know that I can be an X-factor in the NBA. I can run the floor and beat other bigs and I’m faster than most people my size.

How has your body and style of play changed since you first tried to impress teams in earlier Summer League tournaments?

CW: Big time! I put on like 20 pounds since the first year and I’m seven-foot with a seven-foot-four wingspan. I’ve been in the gym, getting in really good shape. I’m working on a routine and a dietary plan with my trainer. We have been doing all the little things you need to succeed. I’ve been training with Joe Abunassar at Impact Basketball in Las Vegas. I have seen DeMarcus Cousins this summer. Norman Powell, Jared Dudley and Alan Anderson have all been there helping me out. Kyle Lowry comes by from time to time, too. The best advice was from Cousins. He helped me out a little and when he saw me play, he told me if I kept putting in this work, people would start to see it. He said it was just a matter of time before it paid off.

You took more three-pointers than I expected during Summer League. Is that an element we can expect to see more from next year?

CW: It’s improving, I’m starting to knock it down and mix it up well. I feel very comfortable from three-point range. I work on it every day. Obviously, I can not just be shooting from downtown all day because I’m a seven-footer. Like, most of my points were around or under the basket. It’s just a second or third thing for my arsenal. My game is still more hustling for rebounds and tipping in dunks, doing the little things. The three-pointer does help stretch the floor, though, even though I’m usually near the rim.

How are you able to use your length to help you succeed on the court?

CW: I’m able to alter shots, I have good feet and good timing to make my shot-blocking ability so strong. They don’t anticipate my length when they see me driving down the lane. That stops them in their tracks. And on the offensive end of the court, I’m able to use long strides and finesse to help finish and score. Even when other guys are more physical, my length can beat them.

How has your experience in the G League given you a chance to show off your game? What have you picked up from there that helped you improve?

CW: Someone who really helped me is Emeka Okafor; it was really good for me to be around him. Okafor told me some tips to help give me a longer career. He told me I can make a lot of money playing this game if I can just stick with my routine, working on the same program. Elton Brand loved me, too. It was a big family down there. Brand was the general manager, but he was also a teammate first. He always loved the energy I provided, it’s just all love with him. We have a great relationship.

During college, you were teammates at UNLV with Patrick McCaw and Rashad Vaughn. How is your relationship with them now?

CW: We all go way back, since college. Pat has always been slept on, he’s always been great in my eyes. Rashad was a lottery pick and I was expecting them to do great. Pat’s success with the Warriors has been incredible, I’m so proud of him. I spoke with him the other day and he’s doing really well.

I was at the game in 2014 when you defeated No. 3 Arizona. They had Stanley Johnson, Rondae Hollis-Jefferson and TJ McConnell but you beat them!

CW: [Laughs] Oh my god. That was my favorite game! It was a soldout crowd. All the fans were wearing white and it was Christmas Eve. Arizona was undefeated at the time. We were clicking at the beginning of the game. We both went on some runs but then at the end, I just asserted myself. I got in a groove and I couldn’t be stopped. I had 24 points, 10 rebounds and a couple blocks. That game was crazy!

Bucks' Brook Lopez: 'We’re very confident that we can win the East' 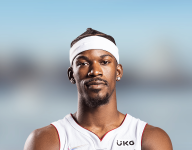