When the Houston Rockets acquired Marquese Chriss from the Phoenix Suns, they landed a former No. 8 overall pick who just turned 21 years old in July.

Also back here in the real world: One trusted observer insists to me that Marquese Chriss will be revitalized playing next to James Harden

Here is what Marc Stein said about the Rockets’ new big man (via New York Times):

“There’s no denying that Chriss, since slipping to No. 8 in the 2016 draft after being projected to go higher, has been underwhelming in his two seasons as a Sun — to put it charitably. But the person I spoke to, whose opinion I trust implicitly, chided me for writing off the Chriss aspect of the trade and predicted that playing alongside James Harden could change the way the 6-foot-10 forward is perceived. All Chriss has to do in Houston, based on that line of thinking, is run to the rim.”

Stein noted that Phoenix had trouble getting him to improve his focus and conditioning. With that in mind, it’s not a tremendous surprise that the former lottery pick has averaged just 8.5 points and 4.8 rebounds per game.

I'm talking myself into this trade for the Rockets. James Harden and Chris Paul should do wonders for Marquese Chriss. I swear, those two could probably even get me an open layup or two.

But it’s worth following what Stein’s source said about Chriss getting to the rim. He has taken nearly half of his shots at the rim since entering the NBA, per Cleaning the Glass.

During his rookie season, the power forward averaged 1.42 points per possession when cutting to the basket. Among players with as many total possessions on this play type, he was the seventh-most efficient player in the league.

His field goal percentage when cutting to the basket (76.3 percent) ranked No. 5 in the NBA, trailing only top players like LeBron James and DeAndre Jordan.

Marquese Chriss was looking at the rim… @NBAonTNT pic.twitter.com/ofGu0zxZIb

Chriss also averaged 1.26 points per possession in transition, which ranked No. 5 overall (minimum: 125 possessions on this play type) among all NBA forwards.

His field goal percentage in the restricted area (59.9 percent) ranked No. 4 that season among all rookies with at least 100 attempts in the zone.

Now, entering his third season in the league, there is still plenty of room for improvement while playing alongside Chris Paul and Harden.

The Rockets acquired Chriss for pennies on the dollar when factoring in the reality that they had no interest in keeping Ryan Anderson for next season. Houston also got a serviceable backup point guard in Brandon Knight in the deal. 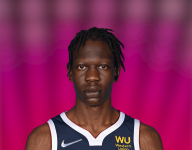 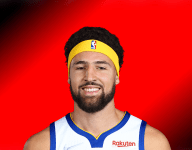