Luka Doncic has been 'best player' during scrimmages for the Mavericks

Luka Doncic has been 'best player' during scrimmages for the Mavericks

Dallas Mavericks rookie Luka Doncic is among the most exciting players who will enter the NBA next season and the hype is already building.

“The word out of Dallas is that Doncic has often been the best player on the court in pickup games at the Mavs’ facility despite not being in great shape by NBA standards. And before you make a crack about the Mavs’ talent or lack thereof, these games have included local products like LaMarcus Aldridge. Doncic, a special passer, is the most accomplished Euro teen ever and has a huge advantage over other rookies because he arrives in the NBA as a seasoned pro.”

Despite missing summer league competition in Las Vegas (since he had just completed his international season) and reportedly “not being in great shape” quite yet, the 19-year-old is giving his front office and fan base plenty of reason to get excited.

He has received a lot of praise from head coach Rick Carlisle as well as his new teammates Harrison Barnes and Dirk Nowitzki. In fact, Nowitzki said he could not believe what he was seeing from Doncic during scrimmages.

Nowitzki also commented on his height, noting that Doncic is a legitimate 6-foot-8.

We’ve seen Doncic succeed in Europe, but getting the endorsement from folks who have thrived in the NBA gives even more reason to believe the hype. 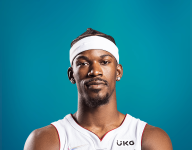