STRENGTHS: Will Minnesota Kevin Love make a comeback? … That might a bit hard since he’s older, he’s changed his game and so has the NBA, but there’s no question he’s still one of the best power forwards in the league … Will have a chance to shine now that he’s gone from trade rumor fixture to franchise player … They have a plethora of good outside shooters – even though there will not be many open shots to go around compared to previous years … It’s a pretty experienced squad.

WEAKNESSES: They are in for a rough adjustment without LBJ in Cleveland … Last time LeBron left the Cavs they went from best to second-worst in the regular season … Shouldn’t be as terrible this time around, but it will be bad … Who’s going to create off the dribble now? … Aside from  Love, no current member of the Cavs has ever averaged 19-plus points per game in an NBA season … They are probably going to struggle offensively … Defense was bad when King James was there and they were playing for something meaningful … Is it going to get better now? … Are veterans used to competing for the title going to be motivated by much more modest goals? … Hard not to think they are better off tanking.

PREDICTION: 4th in the Central Division, 12th in the Eastern Conference. 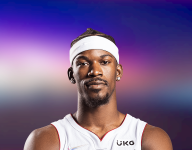