The same year Green won Defensive Player of the Year, Eric Gordon took home Sixth Man of the Year honors. And like Green, it wouldn’t be surprising to see Gordon do it again next season. The 10-year veteran averaged 18.0 points and 3.2 three-pointers nightly last year, and helped the Houston Rockets’ bench be the second-most productive in the league according to net rating. Thanks to his contributions, Gordon finished last season with the second-most first-place votes for the Sixth Man award. And as long as the Rockets keep winning, which is almost a guarantee thanks to how stacked they are, he should have another good shot at it in 2018-19. 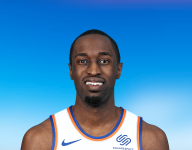