Once the Minnesota Timberwolves inevitably trade Jimmy Butler, free agent wing Patrick McCaw is then expected to finally land with a team.

Sources: Patrick McCaw may wait until the Jimmy Butler trade plays out to sign a new deal. If a team ends up doing a 2-for-1 or 3-for-1 deal that frees up roster spots and playing time, McCaw may look to sign there. As an RFA, the Warriors can still match any deal McCaw signs.

According to RealGM’s Keith Smith, the 22-year-old is waiting to see if a Butler deal opens up a roster spot or two. However, it’s worth noting that that Golden State Warriors can still match any offer sheet McCaw signs since he’s a restricted free agent. McCaw has spent his entire career with the Warriors, winning two NBA championships in his two years in the league.

He reportedly declined a two-year deal worth $4 million, betting on himself to find a team that would be able to offer him serviceable playing time. The 6-foot-7 wing has averaged 15.9 minutes per game during his tenure in Golden State, making 30 appearances in their regular season starting lineup.

According to Anthony Slater, he and his family believe that he could help a team in need of perimeter help more than he’s been able to showcase with the Warriors (via The Athletic):

“This isn’t as much about money for McCaw as it is about opportunity… Sources indicate that both McCaw and his father, Jeff, who has become a vocal part of this process, believe a more expansive role is the best thing for his growth and eventual earning potential.”

The Athletic’s Jon Krawczynski reported that Minnesota covets a “starting-caliber wing” and another young player in exchange for Butler. McCaw can potentially fit either of those roles.

Perhaps the Timberwolves could use McCaw if the team does not land both a starting-caliber wing and a young player in such a deal. When McCaw was a starter for Golden State last season, he averaged 9.9 points, 2.9 rebounds, 3.3 assists and 1.7 steals per 36 minutes. His starting splits were very comparable in his rookie campaign.

Minnesota could wind up needing to fill a roster spot if they are also able to unload Gorgui Dieng. However, the more likely scenario is that another team will end up offering multiple players for Butler and need to find a contributor capable of playing key minutes for their squad. If that scenario plays out, McCaw could step right in and make an impact (if the Warriors don’t match his offer sheet).

What can the Heat offer the Timberwolves in a trade for Jimmy Butler? 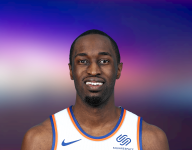