Jonas Jerebko on Warrior teammates: 'I don't see that they are fine with what they have achieved'

Jonas Jerebko on Warrior teammates: 'I don't see that they are fine with what they have achieved'

HoopsHype called forward Jonas Jerebko to talk about the fun of playing with the mighty Golden State Warriors, the game vs. Utah, his future as a free agent next summer and more.

Let’s talk about last summer when the Jazz waived you after a solid season.

Jonas Jerebko: I thought I was going to be there. We made the playoffs, I think I played well so I was expecting to come back to the Jazz. But you know, this is also a business. Coach [Quin Snyder] called me and told me that there wasn’t a lot of minutes at my position. But right after I knew I was going to be waived, my agent [Bill Duffy] called me and told me that the Golden State Warriors were interested. I kinda told him, ‘We don’t really need to hear anything else’. That’s where I wanted to go. I got lucky. You must be playing good basketball when the world’s best team wants you to join them.

But your agent must have mentioned other teams interested in you, right?

JJ: I didn’t hear from anybody else basically because the Warriors were the first ones to say they were interested and after that I told Bill ‘I don’t really need to hear anything else, let me talk to Steve [Kerr]’. And then Steve called like the same day, told me they were interested and they wanted me, so it was a quick and easy decision for me.

How did that conversation go?

JJ: Great. He told me that they wanted me, they needed me. That some nights I might not play at all and some nights I might play more, and you know I might start one night… It could be anything. They liked the way I play and that I’d be a good fit in their system. And that’s what Steve told me. I was ready for anything and it’s been going well.

You made the Jazz pay for letting you go.

JJ: It’s always a little extra when you get to play against your former teammates, especially when you played there last year. I had a great time there, I love that team, I love my old teammates and all that, but obviously I wanted to win that game bad. I must have said that probably more than 10 times [to my teammates] in practice, in shootarounds. All the time I was mentioning ‘I want to win this game’. I just came into the game with a lot of energy. Steve gave me the opportunity to play, my teammates put me in great positions and I managed to get my hands on that last tip to win the game, which is awesome. It was an amazing feeling.

And you ended up celebrating just inches away from the Jazz bench… I’m guessing here but coach Snyder could not be happy at all, especially after what happened in the summer.

JJ: Yeah, of course I remember the play, I knew I was getting into KD and then after that I just went to the basket and tried to get a good position. I was pushed a little bit but I tipped it in. I was looking at the ball and obviously seeing it bounce in I kinda threw a punch in the air and ended up by the bench. It wasn’t planned.

They didn’t want ya Jonas.

Your teammates went on social media to support you and coach Kerr said, ‘That’s the moment where he’s one of us.’ Do you think you broke a barrier and got closer to the rest of the team?

JJ: Maybe a little bit, but I already felt that I had broken that barrier. My teammates have been awesome from day one. We’ve got a great group of unselfish guys, the coaching staff is great. I already felt like at home here but obviously to do that, to get that win, was amazing and maybe it helped a little bit.

You’ve never averaged more than one assist per game and here you’re at 1.5, a career-high.

JJ: I’m very involved in offense here. They want me to create. We’ve got so many options out there to score the ball that it makes it a lot easier for me as a creator to find the shooter. I’m not just setting screens and rolling to the corner and being a shooter. I’ve been allowed to play basketball the way I’ve been wanting to play. It’s been great playing with this system. It’s very free, very open. Like I said, we have so many talented players that we don’t need to overcomplicate things, we just have to move the ball.

Warriors get lessons from Globetrotters. pic.twitter.com/djCGHiR3Nb

The Harlem Globetrotters surely learned a couple of tricks after dropping by the Warriors’ practice.

The Warriors sometimes make rivals look like the Washington Generals in a way it can be deceiving. It looks too easy for some people, like there’s no hard work involved, so they don’t get enough respect compared to other legendary teams.

JJ: Yeah, that’s very deceiving like you said. We’re at our best when we move the ball and you pass up a good shot for a great shot. That’s when we’re really good and really hard to guard. We have weapons all over the place and it’s very tough to guard us when we’re moving the ball. You don’t see the ball moved like that very often. The Spurs with [Gregg] Popovich can play it too and more and more teams are trying to play that way. But there’s a reason teams don’t play that way – it’s very hard to find unselfish players that are willing to play like that. Like I told you before, we have a great group of guys that are really unselfish and they are all about winning.

When a team achieves so much success, the mental aspect of the game becomes more challenging. For example, in soccer Real Madrid has done the unthinkable winning four Champions League titles in five years and they are struggling big right now. What do you see in Stephen Curry, Klay Thompson, Kevin Durant and the rest that makes them keep going every single night?

JJ: This is my first year and I know they’ve been through four Finals and won three championships in the last four years but like all I see is guys that are willing to sacrifice for the team. They just want to win. They’re just winners. I don’t see that they are happy or fine with what they have achieved. They want more.

JJ: He’s good, recovery is going well, I see him working out hard every day. I’ve been in his situation so I just keep telling him to be patient and keep working. It’s going to be an awesome addition when he’s ready to play. He’s an All-Star and I have no doubt in my mind that he will be back at 110 percent here soon. We’re behind him, we want him to succeed and we push him to work hard and be ready when we need him.

He has a one-year contract like you. You’ll have to deal with free agency again next summer. 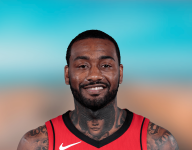 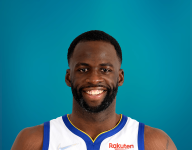 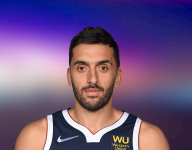 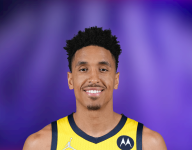