Nikola Vucevic on recent success, the Magic's hot start, his future in Orlando, his first child and more

Nikola Vucevic on recent success, the Magic's hot start, his future in Orlando, his first child and more

On this episode of The HoopsHype Podcast, Alex Kennedy talks to Orlando Magic center Nikola Vucevic about his recent success – just hours after he won the Eastern Conference Player of the Week award. They also discuss Orlando’s hot start (they’ve won seven of their last nine games), the Magic’s young core, Vucevic’s future, the emotions surrounding the birth of his first child next month and more. Time-stamps are below!

2:15: Vucevic talks about winning the Eastern Conference Player of the Week award.

3:20: The Magic have defeated some really good teams and won seven of nine games. Vucevic discusses the team’s recent success and what’s working.

5:10: Over the offseason, Vucevic said that his primary focus was his three-point shooting. So far this season, he’s shooting 45.2 percent from beyond the arc and making 1.1 threes per game. He talks about seeing his hard work pay off, not only statistically but also in the win column.

7:15: New head coach Steve Clifford met with each Magic player over the offseason to go over their strengths, weaknesses and plan for this season. Vucevic shares how Coach Clifford wanted to use him and how much Coach Clifford has helped him.

11:05: Last year, the Magic got off to a great start, but then lost nine-straight games and finished with the East’s second-worst record. What did the Magic learn from last year and how can they sustain their strong play this time around?

13:30: Vucevic talks about how badly he wants to make the playoffs after spending year after year rebuilding.

15:55: This is Vucevic’s seventh season in Orlando. He talks about how comfortable he is in Florida as well as his relationship with Magic fans.

17:30: Vucevic and his wife, Nikoleta, are about to have their first child next month. He talks about his emotions leading up to the birth of his son and how he’s prepared for fatherhood.

19:58: Vucevic talks about his relationship with Nikoleta and how she’s been so understanding and willing to make sacrifices for him over the years. Also, she’s 6-foot-0 so Vucevic is expecting a very tall son.

22:39: Vucevic looked up to his father, who played professional basketball and coached him when he was growing up. He talks about what he learned from his father.

25:05: Vucevic discusses when his massive growth spurt happened, and how he had to move inside and adjust his game.

27:13: Big men continue to evolve around the NBA. Vucevic talks about how bigs have been forced to adapt and it’s led to a ton of really versatile centers around the league.

32:30: The Magic have very talented frontcourt players on their roster with Vucevic, Aaron Gordon, Jonathan Isaac and Mo Bamba among others. Vooch talks about how everyone benefits from practicing against each other.

34:45: Vucevic discusses Gordon’s development and what he’s doing to take his game to the next level.

36:34: Vucevic discusses Isaac’s game and upside. He also talks about how much Isaac has helped Orlando defensively this season.

39:00: Vucevic discusses Mo Bamba’s game and whether the two big men can co-exist beyond this season since they have very different skill sets and Bamba’s development will take time.

42:55: Bamba is fortunate to have a veteran like Vucevic and a coach like Clifford, who has worked with many accomplished big men, as he tries to adjust to the NBA and work toward maximizing his potential.

44:15: Vucevic talks about how good this Magic team could be (now and down the road).

46:15: A listener asked Vucevic: With your name coming up in trade rumors in recent years, how do you deal with those reports and how do they affect you (on and off the court)?

47:50: Several listeners asked Vucevic: Which factors will you consider when you hit unrestricted free agency in July?

This episode is sponsored by Robinhood, an investment app where you can buy and sell stocks, ETFs, options and cryptos. For a free stock, sign up at hoopshype.robinhood.com! 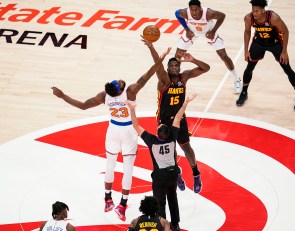