Now over one-quarter of the way through the season, we asked the HoopsHype staff to rank each team from worst to best. There are the results.

Outside of rookie Trae Young, the roster lacks much of the necessary depth to succeed. However, even Young has not been an instant help for them as he has been slow off the gates as a three-point shooter. Atlanta currently has the second-worst offensive rating (100.8) out of all teams in the NBA.

One of the strangest scenarios in the league is the lack of point guard depth for the Suns. Just a couple of years ago, they had a surplus with Brandon Knight, Eric Bledsoe and Tyler Ulis. Now, they do not have anyone outside of rookies De’Anthony Melton and Elie Okobo.

It’s not easy to lose someone like King James but it’s even harder considering Love is still injured. Meanwhile, they have fired head coach Ty Lue and they have parted ways with veteran JR Smith as well. While their players were reportedly unhappy with rookie Collin Sexton, the guard improved after the complaints were leaked.

The organization had a momentous week, firing head coach Fred Hoiberg. Meanwhile, they regained previously injured forward Lauri Markkanen. It’s clear that Chicago is not playing for this season, but it will be curious to see how he pairs with Zach LaVine and Jabari Parker to gauge their long-term future.

While there has not been much positive momentum on back-to-back first-round picks Frank Ntilikina and Kevin Knox, the organization should be happy about other pickups. They’ve received unexpectedly good production from undrafted free agent Allonzo Trier and second-round pick Mitchell Robinson.

Despite a losing record, the Nets have remained competitive in most of their games this season. Their net rating ranks Top 10 in the East, but an inability to finish our fourth quarters has been nightmarish. During their 62.0 “clutch” minutes, they have been outscored by a dreadful 23.4 points per 100.

Their offensive rating (105.2) currently ranks Bottom 5 in the NBA. Their most-used play type is the pick-and-roll finished by their ballhandler, but only one team in the league has averaged fewer points per possessions in this offense.

The five-man lineup that has played the most minutes together (John Wall, Bradley Beal, Otto Porter Jr., Markieff Morris, Dwight Howard) has a negative net rating. They have been outscored by 10.6 points per 100 during the 129 minutes they have appeared on the court.

The Kings have the fastest-paced offense in the NBA and sophomore guard De’Aaron Fox has been the offensive centerpiece they hoped for when they drafted him. Free agency signing Nemanja Bjelica has been a tremendous fit for their offense, too, while Buddy Hield has ranked in the 89th percentile as a spot-up shooter.

No one would have expected big man Nikola Vucevic to rank Top 10 in both PER and ESPN’s Real Plus-Minus. Vucevic has recorded a double-double in approximately two out of every three games thus far. Among high-volume contributors (15 possessions per game), he also ranks Top 10 in points per possession. 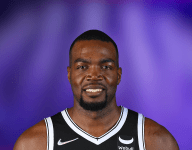