Los Angeles Clippers rookie Shai Gilgeous-Alexander is already reminding some around the NBA  of another guard from his  alma mater (the University of Kentucky).

Sean Deveney checked in with an NBA assistant coach and a league scout about the former Kentucky star (via Sporting News):

“He is pretty imposing defensively, and for a rookie, he is a really, really good and smart defender … But he can rebound, he can make plays and he has gotten more comfortable as a shooter. He’s a little like an Eric Bledsoe — not as explosive, but bigger and a better shooter.”

The rookie is 6-foot-6 while Bledsoe checks in at 6-foot-1. This gives a significant advantage to the 20-year-old lottery selection. But the two point guards do have a lot in common besides merely starting their NBA careers with the Clippers.

Both were first-round picks after their freshman seasons at Kentucky, drafted behind someone else on their collegiate roster. Bledsoe was selected after his fellow guard John Wall as well as the frontcourt duo of DeMarcus Cousins and Patrick Patterson. Eight years later, Gilgeous-Alexander was picked after teammate Kevin Knox.

During his lone collegiate season, Bledsoe ranked No. 6 in the Southeastern Conference in Defensive Win Shares (2.1) in 2009-10. Gilgeous-Alexander ranked fourth in the same category (1.9) last season. The defensive-minded players are both lauded for wingspans much longer than their height would suggest.

It’s helped Gilgeous-Alexander block one shot per 36 minutes thus far during his first season. In fact, his block percentage (22.0 percent) ranks Top 5 in the NBA among guards who have played at least 500 minutes. For comparison, Bledsoe was No. 4 overall with the same parameters in his third professional season.

On offense, Gilgeous-Alexander (39 percent) and Bledsoe (46 percent) take the majority of their shots within four feet of the basket. That’s their bread and butter as scorers.

Shai Gilgeous-Alexander to the rim! #NBARooks

As a shooter, there is plenty of upside to the rookie’s game when compared to Bledsoe’s. With room to develop, Gilgeous-Alexander boasts the exact same effective field goal percentage (.500) as Bledsoe’s current career average.

Both players are most often used as the ball-handler in a pick-and-roll offense. Gilgeous-Alexander is currently averaging 0.93 points per possession on this play type. For comparison, Bledsoe is producing 0.99 PPP in this offense.

If his NBA comparison is Bledsoe, that’s not terrible value considering the career that the latter has had. 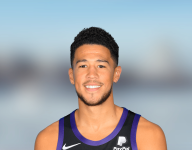