Robin Lopez linked to the Warriors to provide center depth

Robin Lopez linked to the Warriors to provide center depth

Golden State Warriors big man DeMarcus Cousins is reportedly still weeks away from returning and his team could use another big man.

As noted by Marc Stein, the Warriors could be interested in one of the Chicago Bulls’ veterans for depth, even when Cousins is able to come back from his injury (via New York Times):

“One name to file away here: Chicago’s Robin Lopez. The Bulls have made Lopez available via trade along with the former No. 2 overall draft pick Jabari Parker, according to league sources, but moving the experienced center isn’t so simple given his $14.4 million salary. There will be little need for the Bulls to keep Lopez, 30, beyond Feb. 7 if they don’t find a workable trade for him, which may set up the former Knick to emerge as one of most coveted buyout candidates. Golden State’s positional needs also could certainly change between now and then, but Kevon Looney is the closest thing to a proven center currently available to Coach Steve Kerr.”

Lopez, 30, is a 7-footer from Stanford who is now in his 10th season in the league. While he has not started a game for the Bulls so far this year, he has still been an accurate scorer near the rim and on shorter midrange looks.

Lopez could play solid minutes for Golden State even once Cousins is back in the mix. It’s never a bad idea for a contender to add an extra 7-footer who can produce. 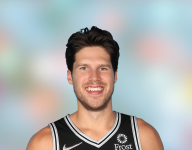