In one of his latest newsletters for the New York Times, seasoned NBA reporter Marc Stein dropped an interesting tidbit regarding the Dallas Mavericks and their 2017 lottery pick point guard, Dennis Smith Jr.

For the first time ever, we got word from a reliable source that though the Mavericks may not be going out of their way to deal Smith, they may, at the very least, be open to the possibility of moving him in a trade.

In Stein’s own words:

“The Dallas Mavericks insist they are not shopping the second-year guard Dennis Smith Jr., but it’s a situation rival teams are monitoring. The instant emergence of the Dallas rookie Luka Doncic, combined with longstanding skepticism about Smith’s ability to flourish alongside Doncic in an off-the-ball capacity, has spawned the expectation among many executives that Smith will eventually be moved.”

The report was backed up by ESPN’s Tim MacMahon in a tweet, too:

“Marc Stein mentions expectation among execs around league that Dennis Smith Jr. will eventually be moved. Mavs tell Steiny that they aren’t shopping Smith, but that’s semantics. Execs from other teams tell me that Mavs are at least gauging market for their 2017 lotto pick.”

Even though it’s probably entirely too soon to give up on the potential of a Smith/Luka Doncic partnership, some of the early signs are just a bit troubling, like the fact that Doncic is far more impactful when he’s not sharing the floor with the NC State product.

According to NBA.com, the Mavericks boast an impressive +4.2 net rating when Doncic is on the floor without Smith, which, if prorated for the year, would be the league’s seventh-best mark. When Doncic is on the floor with Smith, however, that number plummets to -5.4, which would be the NBA’s sixth-worst clip if extrapolated for the season. Add in what Smith being on the court does to Doncic’s effective field-goal percentage (54.1 percent with Smith on versus 46.4 percent with Smith off), and there’s some cause for concern.

A trade may not be imminent, but just in case it is, HoopsHype decided to break down what four of Smith’s likeliest landing spots could look like.

The Phoenix Suns’ lack of a legitimate point guard has been well-documented. Although there hasn’t been much movement on that front quite yet, some believe they could target another ball-handler prior to February’s trade deadline.

One player they could be interested in is Smith.

Phoenix may run into some of the same problems with their backcourt that the Mavs did, in that the team’s 2-guard, Devin Booker, also requires the ball to be at his best. But as the common expression goes: beggars can’t be choosers. Plus, Smith is shooting a healthy 35.4 percent from three this season, ranking in the “excellent” range as a spot-up shooter, per Synergy Sports, so the fit with Booker may work better than it has with Doncic.

What’s more, Smith’s heightened defensive tenacity this season would be a welcome addition to the Suns’ backcourt, which lacks some toughness on the point-stopping end of the floor.

A deal between the two teams could be centered around Suns forward Josh Jackson, who’s had a disappointing start to his career, but would still present an upgrade (at least athletically) to Dallas’ wing rotation. With the additions of Mikal Bridges and Kelly Oubre, Jackson could be expendable if it means landing a high-upside lead guard like Smith.

This fit makes more sense from a Dallas perspective than it does for the Los Angeles Clippers, simply because the Clippers already have their lead ball-handler of the future on the roster in Shai Gilgeous-Alexander. However, part of Gilgeous-Alexander’s charm as a prospect is the fact that he can ably produce while playing either on the ball or off it, as evidenced by his 37.7 three-point percentage and his “good” rating as a spot-up shooter, per Synergy.

With that in mind, building a future backcourt of Smith and SGA could actually be pretty enticing for the Clippers.

The Mavericks, meanwhile, could see L.A. as a good trade partner for Smith because of the point guard they could land in return in a potential deal: Patrick Beverley.

Beverley’s hounding defensive abilities would fit perfectly next to Doncic, who isn’t a great ball-stopper. Also, Beverley’s shooting (33.9 percent from three this season, in the 56th percentile as a spot-up shooter) could make him a solid off-ball threat for Dallas’ backcourt. And he’s on the final year of his contract, which makes him look even better to a potential suitor.

Of course, the 30-year-old point guard alone wouldn’t be a great haul for Smith, so the Clippers could also throw in 2018 lottery pick Jerome Robinson. He has only played in eight games thus far this season due to a foot injury, but has a solid ceiling as a high-scoring off-ball guard.

The Detroit Pistons were mentioned as a potential suitor for another embattled young guard, Markelle Fultz, in recent weeks. But considering Fultz is still rehabbing a shoulder injury and may not even return this season, perhaps Smith would be a wiser target.

Detroit desperately lacks more production out of their backcourt, as Reggie Jackson’s 15.4 points and 4.4 assists per game are of the somewhat empty variety, with the Pistons being outscored by 7.7 points per 100 possessions when Jackson is on the floor. Additionally, the Pistons need another guard to take some of the pressure out of their star frontcourt, Blake Griffin and Andre Drummond, who are putting up All-Star numbers, but are often (understandably) finding themselves gassed in fourth quarters.

Pairing Smith next to Jackson would give Detroit two dynamic guards who can create their own shot late in shot-clock situations, as well as two decent enough shooters that will force defenses to take some pressure off of Griffin and Drummond.

A package centered around Reggie Bullock and Stanley Johnson could get a deal done, and be enough for both teams to walk away happy and feeling better about their chances in the second half of the season.

This is a fit that would make sense for both parties, and probably would have even made sense heading out of the 2017 draft, especially when we factor in the latest rumors. That night, many expected the New York Knicks to walk away with their point guard of the future in Smith as their No. 8 pick, and the Mavericks to respond by taking French point guard Frank Ntilikina at No. 9 overall.

Instead, the opposite happened and now, it seems both franchises are having buyer’s remorse. So why not remedy the mistake by simply trading both players for each other?

Smith would give New York a legitimately promising (and young) lead ball-handler – one who they could build around, and the first of his caliber they’ve had in a very long time. While Ntilikina’s off-ball, defense-first prowess would mesh wonderfully with what the Mavs need from the guard spot opposite Doncic.

This is a pairing that makes almost too much sense, to the point it probably won’t happen, since that’s how things in the NBA usually work. 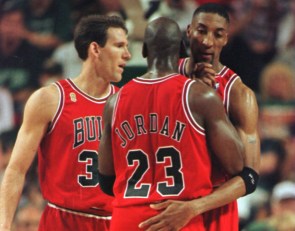