MVP Race: An overlooked NBA star earns his highest ranking of the season

MVP Race: An overlooked NBA star earns his highest ranking of the season

Each week, HoopsHype ranks the Top 10 candidates for this season’s Most Valuable Player award. This list highlights stars who are performing at an elite level and putting themselves in the mix for the award.

This week, two big-name players earned their highest rank of the season. Here are our latest rankings: 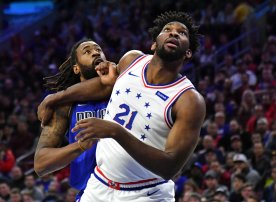 The Sixers are 27-15, which is the fourth-best record in the East. Despite recent drama, Philadelphia has won seven of their last 10.

Last week, Embiid was named the East’s Player of the Week after averaging 31.7 points, 16.3 rebounds, 3.3 assists, 2.0 blocks and 1.7 steals, while shooting 47.5 percent from the field and 50.0 percent from three-point range (while leading the Sixers to a 3-0 week). This was his fourth time earning the award. The 24-year-old has busted out of his slump and is once again looking like one of the NBA’s most unstoppable players.

Embiid and Anthony Davis are on pace to join Shaquille O’Neal, Kareem Abdul-Jabbar and Hakeem Olajuwon as the only players in NBA history to average 26 points, 13 rebounds, 3.5 assists and 1.5 blocks in a season. Embiid would be the first to hit those marks while also making at least 1.0 three per game.