The 2019 NBA Dunk Contest will feature some of the game’s most athletic players, with this year focusing especially on the youth movement.

According to Yahoo’s Chris Haynes, the headliner of the dunk contest will reportedly be rookie Miles Bridges. He will represent the Charlotte Hornets and is sure to be a hometown favorite during the city’s All-Star Weekend.

This news comes less than 24 hours after Los Angeles Lakers forward Kyle Kuzma tweeted that Bridges should receive an invitation this year.

These reports come just hours after Utah Jazz guard Donovan Mitchell said he will not defend his title (via Deseret News):

“I loved doing the dunk contest last year and it was a ton of fun, but I also know it takes a lot of focus, practice and preparation. Right now, my mind is really on helping my team make a deep run (in the) second half of the season. I’m excited though for the weekend, I’m going to be able to be a part of some great events.” 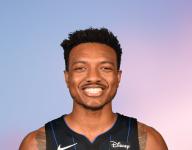