How were these NBA stars ranked in high school?

How were these NBA stars ranked in high school?

Recruiting rankings may be an inexact science, but for the most part, at least with the top-level players, they can be pretty indicative of future success; guys ranked in the Top-2 or -3 of their classes usually wind up achieving some sort of success as professionals.

But that’s not always the case.

And just like some elite prospects end up being busts, as you’ll find out, many players rated lowly coming out of high school end up becoming superstars as professionals.

Below, find out where various NBA stars ranked as high-school prospects.

Not only was All-Star wing Jimmy Butler the 1253rd-ranked player in his recruiting class, according to 247Sports, he was the 226th-ranked junior college prospect, to boot.

Talk about beating the odds.

Not a single junior college player ranked ahead of Butler on the list ended reaching the NBA. Butler, meanwhile, has played over 16,000 career minutes in the Association and has four All-Star appearances and two 3rd Team All-NBA’s to his name. 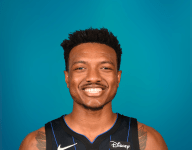