100 things Jazz fans should know and do before they die

100 things Jazz fans should know and do before they die

Excerpted from 100 Things Jazz Fans Should Know & Do Before They Die. Copyright © 2019 by Triumph Books. Used with permission.

When word spread around a Salt Lake City-area elementary school that “The Stifle Tower” had arrived for an assembly before the 2017-18 season, students began chanting something that sounded like it came from a famous sports movie. “Rudy! Rudy! Rudy!”

Kids then erupted in a loud cheer as Rudy Gobert entered the gymnasium after ducking so his head didn’t smash into the doorway that was tall enough for most mortals but not for this French giant. The lanky and patient center spent most of the next hour sitting in a faculty-sized desk chair in front of an exuberant and receptive audience of kids in a dual immersion program. The St. Quentin native – kids learned that’s his hometown, not Paris – mostly understood what they asked in French.

• Favorite player growing up: “When I was young, I didn’t watch basketball, but I watched Space Jam with Michael Jordan so he was my favorite player.”

• When he started playing basketball: age 12.

The NBA has learned a lot about Gobert recently, too. The Jazz were extremely impressed with Gobert after a pre-draft workout in 2013 and deftly worked a lopsided deal in their favor to snag him after the Denver Nuggets picked him 27th overall following his three-year professional career in France. Utah has benefited tremendously from his freakish 7’9″ wingspan, 9’9″ standing reach, improving offensive game, feisty competitiveness, and gregarious personality.

Gobert doesn’t lack for confidence either, even answering an ESPN question about the NBA’s best defender, “To be honest, right now, I think it’s me.”
Not many will argue.

Several years into his career, Gobert, whose father, Rudy Bourgarel, played at Marist College before a pro career, blossomed into the most dominating rim protector in the NBA and was awarded with the 2018 NBA Defensive Player of the Year Award. It’s easy to see why, too. In 2017–18 he contested a league-best 15 shots per game, swatted 2.4 shots per game, and made a huge defensive impact (100.5 defensive rating while on the floor, 107.5 when not).

“I think it’s an empirical fact – empirical from the standpoint that if you look at every number – he has been dominant,” Jazz coach Quin Snyder said when asked about Gobert being the league’s best defender. “I’m not pining for him. I will. But I am just stating what is happening with our team, and what Rudy is doing is special right now.”

Gobert had felt snubbed – using that as motivation – when he’d been overlooked for the award in previous years. He takes great pride in being a defensive menace.

“Defense to me is something that when you watch a game you don’t really pay attention to…unless you’re a specialist. People watch the points, they watch the highlights,” Gobert told media after receiving the DPOY award. “It’s very rare a team wins a championship when you’re not a very good defensive team. I think when you’re a very good defensive team, you give yourself a chance every night, on the road, at home. It’s a big factor and something to build on.”

Gobert has given the Jazz something big to build around, too. As a bonus he’s fallen in love with Salt Lake City and considers it his second home even if it’s not the first choice for some NBA players who prefer a more robust nightlife. “I’m really grateful to be there,” Gobert told ESPN. “It really fits my personality. I just enjoy it.”

Gobert makes that clear in his engaging interactions with fans – like the young ones at the elementary school he visited. While some students asked fun questions about his favorite foods – American (doughnuts), French (liver pâté), and ice cream (gelato) – others inquired about some more pressing and personal matters during two Q&A assemblies (one in French, the other in English).

“Do you have a girlfriend?” a student asked in French.

“No,” Gobert answered en francais. “I am single.”

“Have you ever been dumped?” an English-speaking student later asked, referring to a girlfriend and not Boston transplant Gordon Hayward, who’d just left the Jazz.

Gobert laughed and said, “Who hasn’t?”

Excerpted from 100 Things Jazz Fans Should Know & Do Before They Die. Copyright © 2019 by Triumph Books. Used with permission. 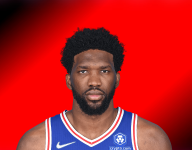