Wilt Chamberlain was one of the greatest players to come out of the conference that now is called the Big 12.

The Microwave provided the spark and offense off the bench when the Bad Boy Detroit Pistons needed a catalyst. Vinnie Johnson is a two-time NBA champ who averaged 12.3 ppg. His No. 15 has been retired by the Pistons.

Jeff Hornacek was a bright spot for the Phoenix Suns. The one-time NBA All-Star has had his No. 14 retired in Phoenix and at Iowa State. He averaged 14.5 ppg and almost five assists per game. Hornacek was part of the trade that brought Charles Barkley from Philly to Phoenix.

One-third of Run TMC (with Tim Hardaway and Chris Mullin) on the Golden State Warriors, Mitch Richmond was an offensive powerhouse. He played 14 seasons and averaged 21 ppg. After the band broke up in Golden State he played seven seasons in Sacramento, then three in Washington before closing it out as a Laker.

Blake Griffin was a first overall pick out of Oklahoma by the Los Angeles Clippers. He didn’t deliver a championship but was a superstar for them. Griffin is now a Detroit Piston. He is a six-time All-Star and averages 22 points and nine rebounds per game.

John Starks was an explosive force in the Knicks’ backcourt from 1990-98. Overall, the 1994 All-Star played for four teams, including the Warriors twice. He averaged 12.5 ppg.

Kevin Durant is one of the great superstars of the game today. He came out of Texas and was selected second overall by the Seattle SuperSonics. Durant moved with the team to OKC before taking the free-agent route to Golden State. He is a two-time NBA champ, two-time Finals MVP, league MVP in 2014 and 10-time All-Star.

Kurt Thomas was the NCAA scoring leader in 1995. He then was selected 10th overall by the Miami Heat. He played with nine teams, including two stints with the Knicks.

Tony Battie was drafted fifth overall by the Denver Nuggets in 1997. He had a journeyman career, which saw him play for six teams and score more than 5,000 points and snare 4,287 rebounds.

The Logo. Jerry West is one of the best players in NBA history. A legend on the court and in the front office. He is a one-time champ and 14-time All-Star, who scored 25,192 points in a storied career. 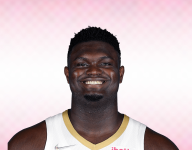