Kuechly makes his presence felt all over the field, serving as the quarterback of the Carolina Panthers’ defense. He’s easily one of the best linebackers in the NFL, and he’s now been selected to six Pro Bowls and five All-Pro teams. He’s a former Defensive Player of the Year who’s coming off a season in which he ranked third in the NFL in tackles for a loss (20) and sixth in solo tackles (93). Hardaway Jr. is another player who signed his big contract in the summer of 2016. Hardaway Jr. is a solid contributor who was averaging 18.1 points per game prior to suffering a season-ending left tibia injury. But unlike Kuechly, Hardaway Jr. isn’t a star; in fact, he’s now on his third team after the New York Knicks dealt him the Dallas Mavericks as part of the Kristaps Porzingis trade. 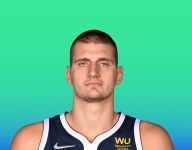