Mahomes convincingly won the NFL’s 2018 Most Valuable Player award after leading the league in touchdown passes (50), touchdown percentage (8.6), quarterback rating (82.0) and adjusted yards per pass attempt (9.6). He took the NFL by storm in his first year as a starter. Football Reference’s Approximate Value metric rated Mahomes as the most impactful player in the NFL (and ranked his season as one of the most productive of all-time). The 23-year-old is still on his rookie deal, but all signs point to him getting a massive contract extension as soon as the Kansas City Chiefs can offer him one. Because he’s on his rookie, his NBA comparison is Holiday, who is a decent contributor that was traded from the Chicago Bulls to the Memphis Grizzlies last month. Mahomes is also earning less than Alexis Ajinca ($5,285,394), Jason Smith ($5,450,000) and Patrick Patterson ($5,451,600). 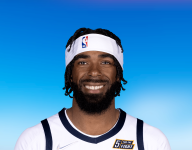