Brees is the highest-paid player in the NFL, which makes sense since he’s one of the best quarterbacks in league history. Even at 40 years old, he just finished as the runner-up in Most Valuable Player voting (behind only Patrick Mahomes) after ranking first in the NFL in passer rating (115.7) and game-winning drives (seven) while also throwing the sixth-most touchdowns (32) last season. Brees now holds the NFL record for most career passing yards (74,437) and most career completions (6,587). If Brees were in the NBA, he’d still be the fifth-highest player in the league (behind only Stephen Curry, Russell Westbrook, Chris Paul and LeBron James). He should feel good about his comparison to Griffin, who is in the prime of his career and in the midst of a monster year with the Detroit Pistons. 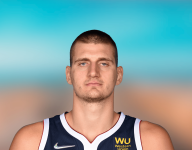