Dwight Powell has earned reputation of 'hardest worker in the NBA'

Dwight Powell has earned reputation of 'hardest worker in the NBA'

Dallas Mavericks big man Dwight Powell is universally praised by his peers and has shown marked improvement in his overall production this season.

Powell, 27, is averaging a career-high in scoring with 17.5 points per 36 minutes. He is shooting 76.8 percent on his attempts within four feet of the basket, which is currently the most accurate (minimum: 250 attempts) among all players in the Western Conference.

What has allowed the 45th overall pick in the 2014 NBA draft to become such a prolific and efficient scorer near the basket? If you ask his coaches and teammates, his success stems from the fact that he has one of the most impressive work ethics in the league.

“He’s put a lot of work in,” coach Rick Carlisle told HoopsHype. “A lot of players don’t work on finishing around the basket. He works on it with pads and stuff like that. He is fortunate enough to be around guys who can make those plays and get him the ball.”

Mavs love Dwight Powell's athleticism and work ethic. They are banking on that work ethic leading to his shot improving.

Just ask Salah Mejri, who has played alongside Powell since 2015 and says that he has never seen a player quite like his Canadian-born teammate.

“He’s maybe the hardest worker in the NBA,” Mejri said. “I’ve seen him as the first one to arrive and the last to leave. Even when his knee was banged up, he was still pushing himself. He has been working on his game, his shot. He got way quicker, too. That’s very useful in the league for a bigger guy. He can dribble and get to the basket. He’s very athletic. This year, he’s been playing constantly and that has built his confidence, too. He’s been doing great things.”

Powell told HoopsHype he always arrives 90 minutes before practice with a measured routine to prepare himself, including pre-rehab to get his body ready for practice. When he gets on the court, he gets his shots up and then he reviews the film with one of the assistant coaches before practice starts.

After practice, he always stays and engages in what he calls “a fun shooting competition” with the younger guys. He also always shoots after home games and, as a self-described cerebral player, tries to at least walk through some of the shots he got that night in his head or work on a few that didn’t feel good.

Then, he usually lifts weights because he says it can otherwise be tough to get that work in without worrying about being sore for games. Finally, he will go back to the locker room to ice, put on compression boots and stretch.

“That’s just how I was raised,” Powell told HoopsHype. “My mom instilled in me at a very early age that you can dream big and there is nothing wrong with dreaming big. But once you have goals and you have these things in mind that you want, it’s your responsibility to do everything in your power to achieve them because no one is going to accept excuses from someone who didn’t do everything they could to try and reach their goals. In the game of basketball, that means taking the time to work on your craft and finding ways to get better every single day and respecting the game in that way.”

It is one of the first things teammates mention when they discuss having him on their squad.

“He can’t sit still. That’s what you see in games as well,” said his frontcourt partner Maxi Kleber. “Even before games in locker rooms, you guys don’t get to see it. But he’s the one who’s hyping everybody. He just has so much energy. He gets everyone involved in his routine. Sometimes, I think he is a maniac and he should slow down. But that is just who he is.”

The Mavericks have outscored opponents by 8.5 points per 100 possessions during the 620 minutes Powell has shared the frontcourt with Kleber.

“We try to go out there every time with energy. He is an energy guy and that motivates you as a teammate whenever he steps out there to keep up the same energy,” Kleber continued. “So whatever happens, it doesn’t matter, he’s going to keep the same level of intensity. I talk to him a lot after the practices and after the games and I want to match him. It’s great to have two big guys who try to go hard every possession.”

Another reason that he has been so effective for Dallas this season is that he is starting to focus on what he does best – scoring near the basket – rather than forcing shots from outside.

His shots near the basket have increased dramatically; in fact, he’s currently attempting them at a career-high rate (67.0 percent). Meanwhile, he has stopped taking long midrange looks. At one point, one-third of his total attempts were from this area, but now they account for roughly three out of every 100 shots.

“For me, it comes down to a feel and how I see things at practice and how guys communicate to me about how they feel about different plays,” Powell said. “So when I’m in a position where I see success in a certain strategy, I want to keep going to that. Strategically as a team, we want to design our offense around what is most successful with our specific units and guys playing together. Maybe from above, plays are being illustrated in such a way that situations I find myself in are a result of those statistics. But personally, I definitely avoid looking at analytics and numbers and statistics during the season and I can overthink things. I like to overthink the feeling more than the numbers.”

Powell currently ranks in the 95th percentile on all attempts within four feet of the rim, per Cleaning the Glass. The big is now in his fifth professional season and he’s ranked in the 90th percentile or better during each of his past four years in the league.

This campaign, however, has been particularly impressive. Among all NBA players who have had at least 250 attempts in the restricted area, none have been more accurate than Powell (76.5 percent) has thus far.

Dallas virtually never uses Powell to post-up, which is not an area that he has been particularly impressive. But he has scored 441 points around the basket on all other play types, per Synergy Sports. The former Stanford standout is averaging 1.53 points per possession in this area. That is higher than all who have finished at least 250 possessions in this manner.

He has been particularly effective when finishing possessions when rolling to the basket in a pick-and-roll offense. Powell has scored 149 points this way, which trails only 10 players in the Western Conference despite him averaging just 20.5 minutes per game.

Powell is shooting 61-for-79 (77.2 percent) on these opportunities, which is the best among those who have finished 25 possessions. Terrific passes from Luka Doncic, who has 48 total assists to Powell, have certainly helped.

“It’s been great having Luka as a pick-and-roll partner,” Powell said. “With his size and his ability to draw fouls, he creates a very unique advantage for our team because he really is able to utilize every option and be able to bait defenders using other guys as open options.”

“His ability to draw fouls makes my man hesitant to help because he puts his guy in a tough position defensively,” he continued. “Obviously, his step-back is always a threat so his defender wants to be on him a little more and that creates more advantages for the roller, which is great for the duck-ins or even to just throw it over the top and down the middle for an easy and quick finish. For a player his age, his vision to see the floor is really incredible and it’s going to continue to improve as he gets even more comfortable in this league.”

The 27-year-old has been comparably prolific when he has cut to the basket this season. Powell has scored 244 points on cutters, which trails only eight players in the NBA. The big man is averaging 1.51 PPP on this play type, which ranks the best among all high-volume contributors (minimum: 100 possessions) in the league as well.

“For me, it’s just my trust in my teammates,” said Powell. “If there is an opening, I’m going to cut as hard as I can because they will try to find me. When you cut hard, guys react rather than read it.”

One reason he has been so impressive near the basket is because of his ability to get to the free throw line. Opponents have fouled him on 24.1 percent on cuts. For a fair comparison, there are currently 67 players who have finished at least 70 possessions as a cutter. Brooklyn’s Ed Davis and Oklahoma City’s Jerami Grant are the only players fouled more often on this play type.

“When you cut hard off of a guy and he gets nervous because the last time you cut you got fed and you got a dunk or some good play happened against them, they’re going to have more of a knee jerk reaction and that’s when guys foul,” Powell said. “It’s about cutting hard and having teammates willing to make those passes.”

According to Cleaning the Glass, Powell has been fouled on 20.1 percent (92nd percentile) of his total shooting attempts.

Overall, his knowledge of the game and passion for improvement have helped him become one of the most efficient players in basketball. Additionally, the big man credited some of his previous NBA mentors for helping to shape his professional attitude.

“I always try to think things through in life, not just basketball, and try to understand things as best I can in all facets of life,” Powell said. “I got very lucky to have some great vets from day one. Rajon Rondo taught me some great things about how to be a pro and how to show up early and how to be a competitor. From him, all the way down to Dirk [Nowitzki] and the guards I’ve played with, I try my best to be a listener. It isn’t always about speaking about how I understand, it comes down to showing them. I try to pick their brain and listen to what they have to say and watch how they implement the things they talk about.

“I try to be a student of the game because the window for all of us is fairly short. If you want to maximize it the best you can, a player in my position comes down to fairly small margins for error. You have to maximize every moment you’re out there.”

Jake Layman has been the 'secret weapon' for the Trail Blazers 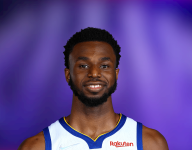