Houston Rockets superstar James Harden had one of the most dominant offensive regular seasons of all-time, which led to some amusing stats.

We previously wrote about the margin between his scoring average and everyone else in the NBA. A big reason for his success was his prolific shooting from beyond the three-point line, which fits perfectly with the offensive philosophy of general manager Daryl Morey and coach Mike D’Antoni.

Of course, that does not mean that Harden is a better shooter when there is someone in his face. As expected, the numbers indicate the exact opposite.

Since the data was first collected in 2013, the Houston guard has connected on 32.4 percent of his three-pointers attempted when a defender was within four feet of him. For context, he is shooting 37.9 percent from long range in this span when his defender has been at least four feet away.

So why did he seemingly score more when guarded?

One reason for the discrepancy in points per possession this season is that he was fouled on 4.8 percent of his guarded catch-and-shoot attempts during the regular season. That rate was the second-most in the NBA among those who had more than 20 of these opportunities, which yielded more trips to the free throw line.

As noted by SportsCenter’s Scott Van Pelt, who argues that Harden is not shooting to make shots but instead to earn a foul, his shooting form looks entirely different when he’s open compared to when he’s guarded (via ESPN):

“You’re not shooting the same way because, really, the goal isn’t to shoot. The goal is to shoot three free throws. And they’re used to getting that call. And they do, a lot. In the regular season, Harden was fouled when shooting a three-pointer 95 times.”

On uncontested looks, last year’s MVP typically lands directly below where he originally planted his feet. But as seen in the video below, when he’s guarded, he kicks his feet out and draws contact from the opponent to earn a trip to the charity stripe.

"My contention is that the shot itself is more an attempt to create contact or at least the appearance of contact than it is to actually shoot the ball."

Considering he has connected on 86.1 percent of his free throws since joining the Rockets, that equates to an unreal efficiency of 2.58 points per possession each time he gets three attempts at the line. That more than makes up for the difference between his contested and uncontested three-pointers.

ESPN’s report explained that Harden led the league with 61 more fouls from three-point range than anyone else in the NBA received.

While it has only recently become a major talking point, it is nothing new for the seven-time All-Star. He has ranked in the 90th percentile or better among players at his position when drawing shooting fouls during all 10 seasons he has played in the NBA, via Cleaning the Glass.

Mike D’Antoni says refs admitted at halftime they missed fouls on Warriors closing out on James Harden. “They missed four of them. That’s 12 foul shots.”

It has led to some decisive complaints about the lack of consistency from the referees, per Sam Amick, as well as two consecutive Houston losses against Golden State. 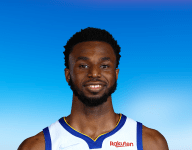