This is how the Orlando Magic head into the offseason

This is how the Orlando Magic head into the offseason

Despite an unceremonious ending to the campaign, the Orlando Magic should exit 2018-19 with their heads held high, as the Floridian franchise was able to reach the postseason for the first time in six seasons, and even stole Game 1 of the opening round series from the juggernaut Toronto Raptors before ultimately falling 4-1. Other noteworthy accomplishments for this year’s Magic include Nikola Vucevic becoming an All-Star after a monstrous regular season (Orlando’s first All-Star since Dwight Howard back in 2011-12), Aaron Gordon continuing to improve as an athletic wing with off-the-dribble scoring chops and being able to land 2017’s No. 1 overall draft pick, Markelle Fultz, without giving up anything of value. If Fultz can find the form that made him such a special prospect back in high school and college, the trade to land him from the Philadelphia 76ers could look like a coup one day, and give Orlando the lead ball-handler they so desperately need.

Of course, things aren’t all peaches and sunshine for the Magic just yet. They will have multiple questions to answer this summer, and they’re going to need to answer them in resounding fashion if they want to make another playoff run in 2019-20, and not have this season be a one-off fluke.

One major decision that awaits Orlando this summer is what to do with impending unrestricted free agent Nikola Vucevic. The 28-year-old big man had a huge regular season, doing a bit of everything for the Magic on a nightly basis, and averaging 20.8 points, 12.0 rebounds and 3.8 assists per game in the process. The problem for Vucevic heading into free agency, however, is his complete no-show in the playoffs. Over the course of five games against Toronto, Orlando’s center shot 36.2 percent from the floor and averaged just 11.2 points and 8.0 rebounds per contest. Sure, he was guarded by an excellent big-man stopper in Marc Gasol, but Vucevic is still in his prime while the big Spaniard is at the very tail end of his, so that isn’t a great excuse.

On one hand, Vucevic’s porous playoff performance can be seen as a good thing for Orlando, since it may lessen his interest league-wide once the free-agent market opens up. On the other hand, though, now that the Magic have seen firsthand how Vucevic handles postseason pressure, is this really someone they want to give anything near a max contract to? We’ll find out in a few weeks.

Orlando has another free-agency decision to make with Terrence Ross. The explosive guard is coming off a career season, one in which he averaged over 15 points nightly and shot the lights out of the ball when coming off the dribble. As such, Ross will have a good amount of interest in free agency, and it’ll be interesting to see how high Orlando is willing to bid to keep him around for the long haul.

Apart from those two players, the Magic will want to see if there’s any way they can dump Timofey Mozgov and the final year of his deal, although it’s possible they opt to swallow the bullet and either stretch-and-waive him or just ride out his last season under contract. That last option might be the wisest, unless they really need an extra bit of cap space this summer.

Finally, the continued development of the team’s young core, including Fultz, Jonathan Isaac and Mo Bamba will be critical for Orlando this offseason. Isaac already has the makings of a downright special defender, but his offense, especially his spot-up shooting, needs a ton of refinement, while Bamba suffered a season-ending injury that cost him a huge chunk of his rookie campaign. He didn’t show much before that, though. Of course, Fultz’s issues are well-documented, so we don’t need to rehash them here. Here’s just hoping this summer can be a turning point for the former top overall pick, and he can at least get back to having a spot in the rotation next season.

Ricky Rubio: The Magic desperately lack a competent point guard, and Rubio would provide them with just that. He may not be special, but he can run an offense and is an underrated ball-stopper on defense.

Terry Rozier: Rozier could be another solid lead-guard option for Orlando, one who might even be cheaper than Rubio considering his weak regular-season numbers in 2018-19. Rozier might be a better fit because his age fits well with the Gordon/Isaac/Fournier core.

Patrick Beverley: A cheaper target, Beverley’s hounding defense and playoff experience would be excellent fits for what the Magic need on their roster.

Reggie Bullock: If Ross walks, Orlando could look to Bullock to replace his shooting off the bench.

Enes Kanter: If Orlando loses Vucevic, Kanter could take his spot in the starting-5. Kanter is a sort of Vucevic light, with shooting ability (only out to the midrange, though) and a solid backdown game.

Jonas Valanciunas: After opting out of the final year of his deal with the Memphis Grizzlies, the Magic could look at him as another Vucevic replacement. He doesn’t space the floor as well, but he’s a very good scorer and rebounder down low.

Goran Dragic: Now that he’s opted in, the Miami Heat are free to trade the one-time All-Star point guard. Sure, they could also use his services considering they missed him when he went down with injury last season, but, at the same time, the Heat seemed to have found something once they made Justise Winslow their starting point guard, so Dragic could be on the move to a point-guard needy team like Orlando.

Jrue Holiday: After the massive Anthony Davis trade, the New Orleans Pelicans have a gluttony of ball-handlers. Perhaps they could be coaxed into dealing one of their veteran options at the position? If they do, Holiday will be a top trade target for a lot of teams, including the Magic, who could really use him as their starting floor general.

Monte Morris: The Denver Nuggets don’t have a reason to move Morris, but they also don’t have a spot in their starting lineup for him, and won’t for the foreseeable future, so another team could try and make a move for him. Morris is coming off a 10.4-point, 3.6-assist-per-game season, and could have a bigger role on a young team like Orlando.

The Magic will select 17th overall in the upcoming draft. They lost their second-round pick, but recouped one courtesy of the Brooklyn Nets. 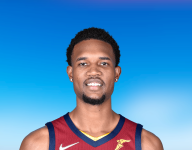