The new-look New Orleans Pelicans have stumbled quite a bit out of the gate, losing six of their first seven games to start the season.

Of course, they are faced with the unexpected challenge of playing without No. 1 overall pick Zion Williamson due to injury. But they added veterans JJ Redick and Derrick Favors to their foundational piece of Jrue Holiday, indicating that they expected to contend even with an otherwise young roster.

Despite the early struggles, the team still has an identity they will look to in order to get back on track. Simply put, they were designed with the modern goal to play with as much tempo as possible.

Before the season began, head coach Alvin Gentry told Jake Fischer that he would be “disappointed” if the Pelicans don’t lead the league in pace. New Orleans executive David Griffin sprinkled on even more confidence when discussing this topic (via NOLA.com):

“We are going to play faster than anyone else. We might play the fastest style that has ever been played. That’s part of who we are. We will pride ourselves on it and we believe in it. We are crazy long and crazy athletic, young and full of energy.”

According to Inpredictable, they have the second-shortest time of possession (12.9 seconds) in the NBA. That’s a full second faster than the league average and their offense trails only the Houston Rockets in this regard.

Overall, the Pelicans are playing at a faster pace this season (106.6) than what they recorded last year (103.9) when they ranked second-best in the NBA. Teams coached by Gentry have always emphasized speed; he and Griffin were colleagues on the Phoenix Suns during the infamous “Seven Seconds or Less” era with Mike D’Antoni and Steve Nash.

This season, however, New Orleans only ranks No. 6 overall in this metric. While it’s the fastest that a Gentry-coached team has played, it is still quite a far cry from the fastest ever.

“I still think there is another gear that we can get to,” Gentry told HoopsHype. “It’s something you have to become accustomed to. If you’re going to be a running team, you have to run every possession. I think we’ve done that in some situations, but we haven’t been consistent with it.”

He added that it can be challenging to run in all situations on the court, which means there are opportunities lost. Gentry clarified that this does not mean that he wants his team taking quick shots, instead emphasizing quickness on the first three steps taken after the ball is rebounded.

But the Pelicans are currently averaging 10.3 seconds per possession after they have grabbed defensive rebounds, which ranks just ninth-quickest in the NBA. That points to exactly what Gentry was alluding to when he said they need to always be the fastest possible version of themselves so as to not miss any opportunity.

“I think for us to be a good team with the personnel that we have, we have to become a consistently running team and we haven’t been able to do that yet,” continued Gentry.

As he discusses personnel, the elephant in the room is that Williamson is not yet back from injury. During his sole collegiate campaign for the Duke Blue Devils, he was one of the most efficient transition threats in NCAA history.

I still can't over how Zion Williamson went 56-of-67 (83.6%) in transition at Duke. It's going to be so fun to watch him run the floor in New Orleans, especially with Lonzo Ball firing off lead passes. pic.twitter.com/aTRLQXCRi7

Whichever team landed the No. 1 overall pick in the 2019 NBA draft lottery was inevitably going to play a remarkable brand of transition basketball with Williamson on their roster. The ping pong balls ended up landing in favor of the Pelicans, which was surprisingly good fortune considering Gentry is such a believer in a fast-paced offense.

But when New Orleans landed the haul that they did from the Los Angeles Lakers, they received a trio of players set to be fantastic complements to this particular style.

Brandon Ingram, Lonzo Ball and Josh Hart have been featured together on the court together for 76 minutes since joining the Pelicans. Among all three-man lineups who have played as many minutes, these three have the second-fastest pace (115.3) in the NBA.

The Lakers ranked No. 3 overall in pace and No. 1 overall in points scored in transition when Ball was a rookie in 2017-18. Los Angeles then ranked as the fourth-best team in both pace and transition scoring last season.

Now on the Pelicans, Ball is averaging 2.1 transition assists per game. That ranks third-best in the Western Conference, behind just LeBron James and Russell Westbrook. His assist-to-turnover ratio (7.5) on this play type is the best among any player in the West.

“It’s good for us because we all like to play that way,” Hart told HoopsHype. “Zo has always played like that. BI and I are both adapting to playing at this kind of speed. It’s good but I think we can be faster, more fluent and execute better. It’s a work in progress. Rome wasn’t built in a day, though we’re all so bought in.”

Hart is averaging 5.4 points per game in their transition offense, which ranks sixth-best among all players in the Western Conference. He has also been one of the most efficient scorers when finishing possessions as the ballhandler in transition.

Ingram, meanwhile, has arguably been the biggest beneficiary of the style of offense that the Pelicans are running. He is averaging 25.9 points per game, a huge improvement from the 13.9 ppg he produced on the Lakers.

“When we get in transition, it’s really good for us because we’ve got guys that can run the lane and shoot the ball,” the former No. 2 overall pick explained to HoopsHype after a career-high 40 points against the Brooklyn Nets. “It is just going to keep building and building, getting better and better.”

Brandon Ingram has been incredible to start this year. Looks like he’s taken the leap. Both the team environment getting him to better spots on the floor in halfcourt plus getting more transition opportunities, and him looking to have made a leap in terms of his physical strength

And as Gentry noted, even beyond Williamson and the former Lakers teammates, their roster is built for speed.

Former second-round pick Frank Jackson recorded the fastest shuttle run (2.70 seconds) at the 2017 NBA Draft Combine. That is the best mark by any participant in each of the last three seasons. When asked how that has fit with what New Orleans is doing, Jackson answered confidently.

“It is perfect,” Jackson told HoopsHype. “I’m pretty quick on the ball and off the ball and I can get up and down pretty quickly. So it is an advantage for me and I’m going to keep pushing.”

He has taken four attempts as the ballhandler in a transition offense so far this season, connecting on three of them. The play that best illustrated this skill set was a pull-up three-pointer on the break against the Denver Nuggets.

New Orleans forward Kenrich Williams ranks Top 10 (5.20 MPH) for average speed on offense with the same qualifiers mentioned above as well. According to Synergy, he has averaged 1.6 points per possession when finishing in transition. That mark currently ranks in the 96th percentile among all players in the league.

“We want to be the fastest-paced team in the league so coach really drills that on us,” Williams said to HoopsHype. “I just try to run to the corners and give guys space to create. That’s the main thing with me… When we play fast and guys drive to the hole, it opens up the lane for you because the ‘help defender’ has to help down, which leaves me wide open on the wing.”

That is exactly what happened following a steal from Hart against the Dallas Mavericks. He was so speedy down the court that he was in the perfect place for an uncontested attempt from long range.

Among all players who have logged at least 20 minutes this season, the Pelicans’ key free agency acquisition JJ Redick ranks second-best (5.46 MPH) based on their average speed run on offense.

That is by far the fastest measure he has recorded since this has been tracked despite the fact that he is 35 years old.

“I didn’t know they charted that,” he said to HoopsHype, noting that he was not a track athlete and was never one of the fastest players on his teams. “I was actually known, growing up, as one of the slowest. The irony in that now is kind of funny.”

He explained that he put a lot of emphasis on his body after his freshman year of college at Virginia Tech. Alexander-Walker then averaged 1.29 PPP in transition as a sophomore, which ranked in the 88th percentile among all NCAA players and No. 32 among the nearly 600 D1 players with as many opportunities. The first-rounder has a chance to keep that same energy on the Pelicans.

He said he is also studying his teammate Ball, who has been a tremendous influence due to his own successes in this type of offense.

“His change of pace and his change of speed are really good. Zo goes zero to a hundred in an instant,” the rookie said. “Then he’ll go from 50 to 100, which is also so important. That’s what has helped him. He can go fast then slow down, make defenses turn and put them on their heels.”

When it all comes together, and Williamson is back on the court, the Pelicans can start to resemble the version of themselves that they envisioned when the front office assembled their roster. If they’re going to start winning, it’s going to be because they’re going to play even faster than before. 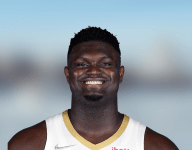